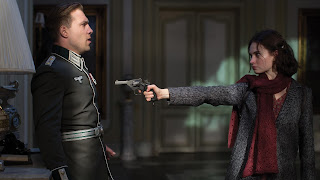 This movie is about a German Captain named Stefan Brandt played by Jai Courtney, he is sent to live with exiled German King(Christopher Plummer) and his wife to investigate and look for spies and eventually to seek out Monarch sympathizers. The German Army heard a British spy was living in the village and they wanted to find out who it was. Brandt ends up falling in love with one of the maids, Mieke played by Lily James. Turns out she's actually Jewish and he helps her escape.

I really liked this movie, it was slow at some parts but very entertaining. The beginning of the relationship between Brandt and Mieke is a little ridiculous and hard to believe but hey - it's Hollywood. There are so many movies about World War 2, but this felt different because it was really interesting to see how no one was safe - even the royal family. I guess I forgot that there was even a king in Germany before Hitler. Anyways, if you like war movies or love stories you'll like this one.