War for the Planet of the Apes 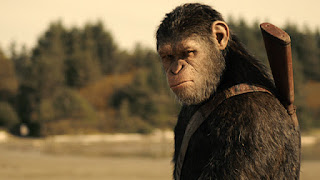 This movie follows Cesar - the leader of the apes and the protagonist in the film, he goes on a revenge mission to avenge his family that was slain by the colonial (Woody Harrelson).

Cesar is accompanied by some friends and along the road they meet a human girl who is mute. As they go further and further into there journey the apes discover human bodies and realize that people are actually becoming more and more like apes, loosing the ability to speak and are being killed to prevent the virus from spreading.

Cesar ends up being captured by the colonial and is taken to the border of CA where they have been imprisoning apes and forcing them to build a wall. There are other humans who plan on attacking them and the wall is supposed to help protect them. These two groups of people are the last humans on earth and in the end they end up destroying themselves. Don't worry though - the apes get free before that happens.

Some things to take away - I found myself rooting for the apes. I like animals more than people and I always side with the oppressed. Woody Harrelson was an awesome villain, you find yourself wanting to just crawl through the screen and slap him. He's a fantastic actor and I pretty much love anything he does. Andy Serkis as Cesar was incredible, you really have to see for yourself how he completely transforms. I enjoyed this movie and if you liked the other films you'll enjoy this one as well.

After seeing this film, all I can say is “wow”. This film is the second Planet of the Apes film directed by Matt Reeves, who has also directed “Cloverfield” and “Let Me In”, and he hit it out of the park again. This film is a much darker film than the previous two installments and was surprisingly disturbing. The story line was deep and emotional, especially showing Caesar making human- like choices. It gave him more character showing that he does not always make the right choices. This film was written beautifully showing both sides of the war. Each army had their own flaws, which made it difficult to choose a side to root on since neither were perfect. The acting was absolutely brilliant. Woody Harrelson made a great leader on the side of the humans, as a disturbing and disgusting person. Through the film he scared me as a viewer. He played such a cruel man, showing his range as an actor. On the other hand, Andy Serkis took the character of Caesar to a whole new level. The emotional level of Caesar is majorly upped and Andy heavily contributed to that.

By now the use of CGI is just a well known fact, but I have to address it anyways. The CGI was absolutely breathtaking. This series brings an insane amount of life into these apes. The film was also beautifully shot by Michael Seresin. And the soundtrack was a fantastic call back to the original Planet of the Apes films back in the 60’s and 70’s, which used similar tones and beats with a modern edge.

Now as great as this film is, it does have its flaws. War of the Planet of the Apes did have quite a few slow points and did tend to drag on. It really did not deserve the title WAR of the Planet of the Apes because it was more of a battle. And with that being said, it did not have the pay off that was marketed in the trailers like I was hoping. This makes me think that there are more films to come in this franchise. The final flaw I could pull from this film is that it just did not hit has hard as the previous two installments. It is great, but I prefered the first two.

Now like I've said before, “War for the Planet of the Apes” is a beautiful critically acclaimed film. It shows incredible new layers to Caesar, like we have never seen before. The CGI is amazing and the story takes you on a new, darker level for this franchise. Woody Harrelson does shine as the disturbing Collonal. I do feel that some audiences are going to go into this film expecting a hard core action movie and be disappointed by the use of more dramatic elements. However, I do encourage everyone to see this film as soon as they have a chance.

After a brief recap of Caesar’s evolution from young scientifically/intellectually enhanced human pet project chimpanzee to revolutionary ape leader and the contrasting effects of the ALZ-113/simian virus on ape and humankind- physiologically, mentally, socio-politically, and morally- “War” picks up 2 years after its predecessor, “Dawn of the Planet of the Apes” (2014). After the events of the preceding film, the evolved apes and surviving human population have been in constant conflict. At the head of the ape community we find the aged and war worn, yet always mighty and moral, Caesar (Andy Serkis) still trying to find a peaceful resolution. Though attempting to live a peaceful and secluded existence with his kind in the distant California woods, he and his fellow apes are still hunted as a threat feared and abhorred by the remaining humans. Leading the hunt is crazed simian-hating military leader the Colonel (Woody Harrelson)- an echo, as is much of the film, of “Apocalypse Now” (or “Ape-Pocalypse Now” as scrawled out on a wall in one scene)- equipped with a twisted sense of duty to preserve humanity through the annihilation of apekind.

Thwarted in his attempts for peaceful coexistence and weary of the constant battles and danger to his clan, Caesar- or Ape-Moses as you’ll come to see him- plans to take his community away from the unending conflict and human threat to a safe haven promised land across the desert (in a barely hinted at biblical reference). But on the eve of the planned departure, in an attempt to take out Caesar, the Colonel leads his army of humans (and traitor apes) in a violent and devastating assault on the community. Racked with pain and anger at the brutal attack and heavy, shattering loss, the previously empathetic, peace-seeking Caesar becomes consumed with rage and vengeance. Sending his clan on without him, he embarks on a mission of revenge, accompanied by a small crew of his most trusted comrades- including his close advisor/friend and beloved Orangutan, Maurice (Karin Konoval). On their trek across snow-covered mountains and valleys they pick up an orphaned mute human girl (Amiah Miller), whom Maurice adopts, and a lone zoo chimpanzee named Bad Ape (Steven Zahn), who directs them to the Colonel’s fortress. Faced with the full magnitude and rationale of the Colonel’s madness and the inhumanity of these remnants of the human species, Caesar must rediscover/redefine his own sense of morality and the code and future he wishes to leave for his own kind.

The title is a bit misleading, as the film is not as externally as it is internally battle focused. Though the action is definitely present and compelling to watch, it’s Caesar’s inner struggle that guides the story. In his journey, he is faced with the depths of cruelty humanity is capable of and haunted by visions of his deceased (murdered by him) friend-turned- rival Koba- whose tortured experience with humans led him to betray Caesar, begin this war, and foresee/arguably help to foster this downfall of humanity. Usually empathetic and morally-minded, Caesar must contend with the outer and inner demons threatening to plunge his soul into total darkness.

The dark color palette matches and sets the bleak and somber tone of the film, evoking a broodiness that mimics Caesar’s emotional state and the solemn mood felt throughout the film. But though sobering, the film is greatly entertaining. The action is intense. The score is brilliant and guides us through the battles, snowy mountain treks, and emotional moments with all the right tonal changes. The motion capture is extremely realistic, from the emotion catching close-ups of the apes to their snow caught fur, the expressiveness and detailing are so incredible yet subtle that you may catch yourself forgetting to recognize the seamless technological effort. And the cast is excellent; Serkis confirms his place as the mo-cap king and a truly underrated actor in an award-worthy performance. Zahn adds some needed comic relief to the intensity of the film and both he and Miller succeed in delivering performances that add a bit of light and tenderness to the troubled world we find our starting cast in.

The entire ape ensemble is so compelling to watch (dramatically and technologically)- even with the majority of their conversation in sign language- that you never find yourself really missing the humans on screen. In fact, not only will you be rooting for the apes the whole film, but, by the end (and possibly a lot sooner), you may find it hard not to start rooting for your own extinction. Like Caesar, you’ll be questioning what really defines humanity, and if that term even applies.

With a great deal of homage to older war films, Golden Age biblical epics, the original “Apes” films and western elements, the new “Apes” film is still a refreshing original all its own. It’s a sobering commentary on the complexities of morality and humanity in times of war, turmoil, and the battle for survival. Great as a sequel or standalone film, “War” successfully closes out the trilogy arc, while paving the way for the franchise’s continuation. And with this season’s track of less than stellar sequels and franchise flops, it’s a rare commercial and critical success; the summer blockbuster to redeem all summer blockbusters.