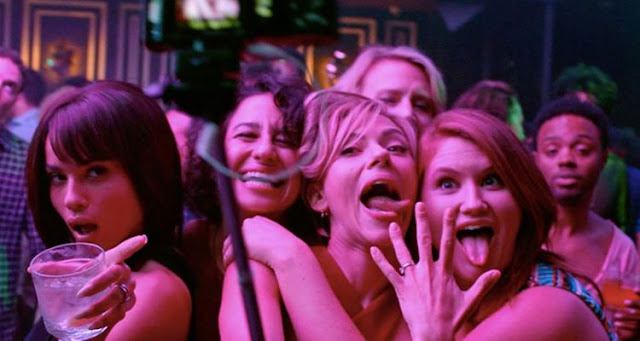 While a Miami bachelorette party takes a dramatic turn in Rough Night, the real focus is on whether the movie will leave us laughing ourselves into stitches or if it will be dead in the water. Designed as a cross between the likes of Bridesmaids and a feminine Hangover, Rough Night sadly falls short of expectations in spite of its promising cast.

As four college friends reunite in one last attempt to relive their youthful years spent as party animals, they converge on Miami to celebrate the bachelorette party of one of their closest friends. Facing an uphill battle to win an election, the bride-to- be has one last chance to let loose and invites one more friend from her time abroad in Australia. The five go on the typical drug and alcohol induced benders to be expected from such a film – but when they return home and celebrate in traditional bachelorette fashion by ordering a stripper, things quickly go South. Accidentally killing the stripper, the five end up making a string of poor but comical decisions on how to deal with the situation.

Rough Night had great potential – a stellar cast with some serious comedic chops, the director of one of the most hilarious shows on TV today, and a funny enough setup. Unfortunately, the film is not able to hold itself up against other comedic classics and ends up being a funny-enough film most of us will have forgotten in a year. The movie features some hilarious scenes – particularly those revolving around Scarlett Johansson’s fiancé (Paul Downs) and his quiet and pretentious bachelor party. Kate McKinnon provides the over-the- top, ridiculous character work that we have come to love and expect from her. The drug fueled bender and some of the early setup also gave the movie some funny and promising setup. But despite these highlights, Rough Night seems to falter with its odd pacing and lackluster writing.

Inebriated parties and drunken bachelorette shenanigans are surprisingly in short order in Rough Night, with a majority of the focus on the slapstick dark comedy surrounding the death of a stripper in their vacation home. Yet oddly, the approach to the stripper’s death seems to focus more on dark rather than comedy. The jarring emotional shifts felt awkward and occupied too much screen time that could have been better spent on making us laugh. Many of the jokes also seemed cheap – focusing on the fact that they have a dead body, or cheap vegemite jokes, that felt easy and overdone. Yet the biggest transgression was the writing’s poor character development. For such a stellar cast, most of the characters lacked any true distinctive personalities and none had a real opportunity to shine. Where Bridesmaids, The Hangover, and Broad City succeeded was in its strong personalities and relatability, and Rough Night had a noticeable lack of fun or relatable characters. Too much time was spent on the situation itself rather than on how its characters (hilariously) handle the situation. Rough Night feels like a tease – almost getting to the best part only to realize it was all we are going to get.

Rough Night is a funny enough movie, but that’s about all there is to it. It just doesn’t feel like a worthy enough film for the acting, directing, and writing talent involved in the film. For a simple, fun night out with some friends, it may be worth your time.

Five college friends reunite after 10 years when they pull their friend Jess (Scarlett Johansson) away from her busy life for a wild bachelorette weekend. They embark on a trip to a beach house in Miami where they have a weekend that is unforgettable because of the accidental death of a stripper.

This movie is full of twists and turns and an hilarious cast. The former roommates include: ex-girlfriends Blair (Zoë Kravitz) and Frankie (Ilana Glazer), Jess's best friend Alice (Jillian Bell) who does not want to let go of the past and Pippa (Kate McKinnon), an Australian friend that Jess made while studying abroad. With several known comedians I knew I was in for some laughter. The movie did not disappoint as the jokes continued throughout the entire movie leaving both me and the audience around me laughing again and again.

The death scene will have you a little wary of where the movie is going to go because the tone gets dark fast and there is blood and lots of it. The movie however quickly switches back to comedy as the cast tries to decide how they should handle it with their varying personalities. From there the laughs came from every which way and there is not more than a two minutes interval where the myself and the audience were not laughing.

The chemistry of the characters worked well including the syncing of their comedic timing. The moment of conflict where it's those scenes were the fun ends and arguments ensue were not a drag like other comedy movies can get.

If you are looking for a comedy movie that is one to remember then I definitely recommend Rough Night. Also make sure to stay during the credits for a bonus scene that will have you wishing there was more celebrations to come from this quintet.