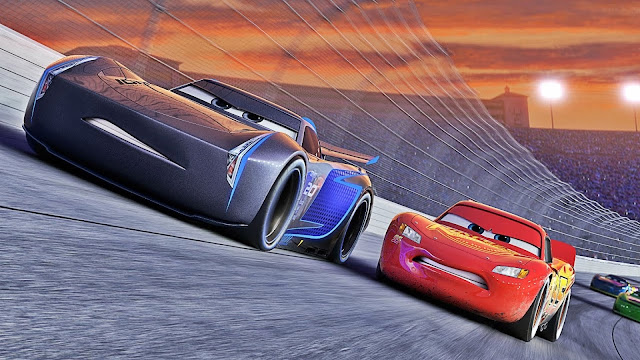 In CARS 3, we find our protagonist anthropomorphic champion racecar Lightning McQueen (Owen Wilson) right where we left him, at the top of his game. But, as he abruptly learns, the game is changing. The world of racing is entering a new age, with a new breed of technologically advanced nextgen racers zooming into the spotlight, leaving Lightning’s apparently dying breed in their dust. Leading this new wave is arrogant new-kid-on-the-track Jackson Storm (Armie Hammer), a sharp-looking, fast-driving rookie sports car with the best new tech and number crunchers at his back. Watching Storm’s success outshadow his own and finding himself the lone remaining veteran on the track, Lightning is determined to press on. Refusing to be left behind by these new age speed demons, Lightning pushes himself a little too far. Suffering a terrible crash and tragic loss, his gear, confidence, and pride are severely damaged and he’s forced to take some time away from the track to recover.

Wrapping up his recovery with even more determination not to fall into obscurity, Lightning refuses to retire or call it quits. Not wanting to become a relic of the past, he sets out to become as good as or better than Storm, with the help of a new sponsor, tech and money-minded Sterling (Nathan Fillion), and the new trainer he assigns, Cruz Ramirez (Cristela Alonzo), a young and perky female car who gave up on her own racing dreams. Struggling with his new trainer and new tech training program, Lightning goes on a bit of a journey of rediscovery, taking the eager young Cruz along for the ride, he finds that he has just as much to teach as he has to learn. Aided by the help of some old and new friends, the guiding memory of his late mentor Doc Hudson (Paul Newman), and his own developing mentor-mentee relationship, Lightning discovers new inspiration and purpose that- with some baton-passing and self-realization- bring the story’s ending full circle.

While Wilson’s unique voice and drawl still manage to hold that familiar appeal, the appeal of the protagonist and his somewhat repetitive- “do I have what it takes?- struggles seems to diminish a bit with each film. But the relevance and relatability of Lightning’s battle with obsolescence in a new age of tech manages to induce some fresher interest. Hammer’s Storm- voiced with just the right amount of bluster and bombastic air needed- and the rest of the nextgen cars, attitudes, and practices are humorously representative of the millennial generation. Alonzo gives voice to both Cruz’s perky eagerness and damaging self-doubt, but the character’s potential for greater comic and personal appeal is a bit overshadowed by the latter. Still, the growth that her character experiences- with the help of Lightning- builds up an encouraging sub-theme of female empowerment.

The jokes aren’t as numerous as in its predecessor’s and, with the exception of some compellingly fast-paced and detailed racing scenes, the animation isn’t too visually stimulating. Compared to other Pixar films and franchises, CARS is not a groundbreaker but the messaging of putting pride aside, working together, building others up, and believing in yourself no matter what (with a bit of a girl power component) are still felt. Simple, sentimental, and a bit predictable, CARS 3 is not a critical success, but its established kids and family audience should find themselves sufficiently touched and entertained.

Cars 3 is the third installment in Disney/Pixar's Cars franchise. If you're going to see this movie you most likely have seen the prior films. Did we need another cars film? No - we didn't.

Lightening McQueen returns along with all of the other characters except for Doc (RIP). He is the top racer competing with his buddies and it's all friendly and fun until the new, younger racers start showing up. Jackson Storm starts beating McQueen and replaces him as number one. Feeling defeated, and after a turn of events McQueen ends up with a trainer, Cruz Ramerez. She teaches McQueen to race like the new cars but she ends up learning more from McQueen than she thought.

I liked that this movie showed how deeply the loss of Doc affected McQueen. I was surprised that it was such a big part of it, something I wouldn't expect. I also liked that there is now a female lead who is a racer. I think that's pretty cool especially since Cars is a franchise more appealing to boys.

I didn't like that the other characters were only in it for a few scenes. I love Mater, he wasn't in the movie much and his lines weren't as funny as he usually is. Sally was barely in it. The movie just lacked heart even though you could tell that's what they were going for.

If your kid wants to see this film you might enjoy it. it's got some humor but it's not on par with the other Pixar films.