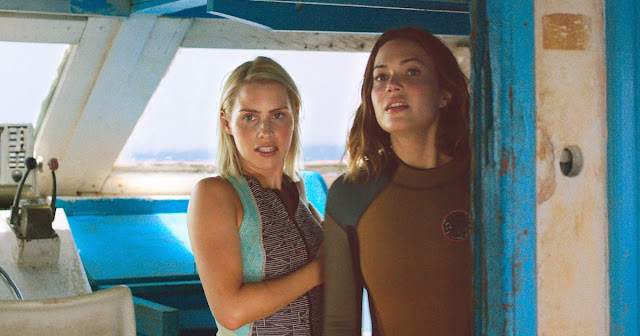 Lisa (Mandy Moore) and her sister Kate (Claire Holt) are on a Mexican vacation after Lisa's original plans for it to be a romantic getaway with her boyfriend are cancelled due to a breakup because she is "too boring". After a night of partying with two local men, the sisters decide to go on a shark-cage diving date with them the following day to prove to Lisa's ex that she is indeed not boring however she and her sister end up getting trapped underwater in the rusty old cage fighting for their lives.

Just when you thought there were enough shark movies, we are given the movie 47 Meters. The movie starts off in the water as the cast's names are displayed and music plays giving the element of suspense because you have no idea what to expect with the water background. This suspense lasts throughout the movie as you start wanting to play the guessing game of who is going to make it to the end of the movie.

I really liked how the story made the suspense come from not just the sharks surrounding the cage after its plunge but also the idea that the sisters had to trust the strangers above them to not leave them underwater to die from lack of oxygen, getting the bends from elevating too quickly to the surface or worse, just leaving them to die altogether by abandoning them. The camera angles and motion also add to this because it feels like you have broken the fourth wall and are sitting in the murky waters trapped as well.

While watching 47 Meters I did get that feeling of "maybe I should've have saved this for when it comes on television" however it was worth the big screen, especially if you are into shark movies. There is a scene that I have never seen done before in a shark movie where delusions set in that actress Mandy Moore executes well. Also the panicky and almost downright dumb choices of some of the characters that had the audience yelling and laughing at the screen is not something you can enjoy (and even join in if you like) while at home.

I will say that I think they should have have left the differential scene from Mandy Moore that I described as the ending but instead the movie continued and left me slightly disappointment. I was overall surprised by how engulfed I was by the plot and the characters' fear and would recommend this movie for sure if you are a shark fan or want to see a decent shark movie this summer.