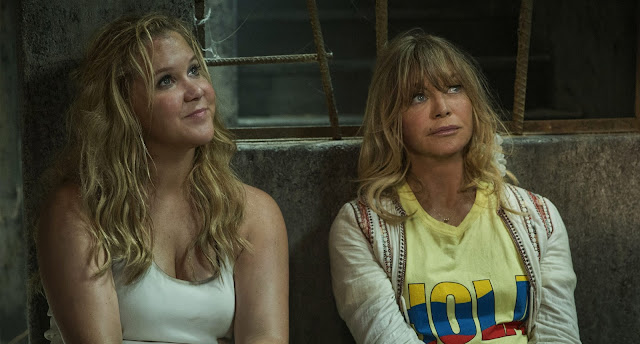 
Snatched follows Emily Middleton (Amy Schumer) after her boyfriend dumps her and bails out on their upcoming trip to Ecuador. When none of her friends agree to take his place, Middleton invites her extra cautious mother (Goldie Hawn) which leads to an adventure filled with them trying to escape the jungle.

Let me start off with this movie did not disappoint as a comedy. Throughout the movie there was not more than a 3 minute time span that went by where I wasn't laughing. The jokes varied from appropriate to down right vulgar which I thought was a great mix especially since the two main actresses have different approaches to humor.

I will say however during the "heartfelt" moments it was difficult to take them seriously since it would go from comedy to drama right back to comedy so quickly. I don't think the duo's chemistry worked in that sense but the humorous scenes made up for it.

Also the story line could have used some TLC as it felt thrown together and random in some parts. I felt like the writers relied more on the comedy effect and then would remember that it was a mother-daughter film and try to sprinkle in touching moments but I feel like they could have been shorter.

Without ruining exactly who, the film was also full of well known actors and actresses. Even though the plot was slacking in places, all of the laughs mixed with the well-known cast made the film worth watching.

Rating: 3 out of 5
Vacation in Central America typically goes hand in hand with margaritas, warm beaches, Salsa music, and… kidnapping? When a mom & daughter duo get kidnapped on their “exotic” Central American vacation, the latest Amy Schumer comedy brings to life the warning your parents always told you about visiting Central America. Yet is Snatched funny enough to make you snatch up a movie ticket to the next screening?

Stuck with a non-refundable Ecuadorian vacation after her boyfriend dumps her, Amy Schumer goes on the hunt to find someone else to fill his place. With no friends willing to tag along, she convinces her shut-in, paranoid mom (Goldie Hawn) to join her. With Schumer ready for adventure and Hawn just trying to survive the trip with as little excitement as possible, the two soon find themselves abducted in an attempt to extort ransom money from their relatives back home. With no money to give their captors, the two have to fight their way to freedom in an over-the- top fashion we have come to expect from Schumer.

For better and for worse, Snatched is the comedy brainchild of Amy Schumer. Feeling like a long sketch from Inside Amy Schumer, we are given the same raunchy, exaggerated humor we have come to expect. Schumer once again portrays the aimless, self-obsessed, awkward, vulgar girl that has become her shtick. Throw in some cheesy, weak moments of overcoming your character flaws to come together and save the day, and you get, plot-wise, a hollow movie. Snatched is sadly uninventive, especially from a movie with the likes of Schumer and Hawn.

Yet for those who appreciate Schumer’s humor, the film is funny enough to be redeemed. The comedy is middle of the road, with some truly superb moments and some that will make you roll your eyes. One of the best aspects of the film is its own self-awareness. The film pokes fun at the brutal truth behind slapstick comedy, the poor cultural awareness or appreciation from tourists, and the vapidity of our social media culture today – and it handles it all well and hilariously. Although the comedy is nothing new, I still found myself enjoying it for what it was. There are some great lines and hilarious moments that I am sure I will reference or talk about later. And although less ambitious than Trainwreck, I still feel that Snatched is a funnier movie altogether.

Snatched is not on the path to becoming a comedic hallmark, but it is a funny-enough movie that is a fun, easy watch. It is a mix between your standard buddy-flick and Schumer’s typical comedy. With a better script and direction, the movie definitely could have set itself apart from the competition, but even as-is it is a fun film to watch to put yourself in a good mood.