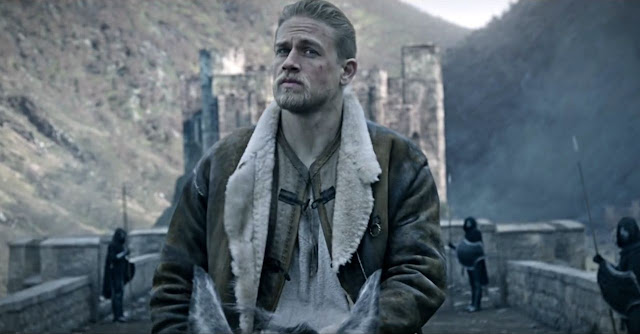 
Guy Ritchie brings the epic story of King Arthur back! As a child, Arthur (Played by Charlie Hunnam) has his birthright stolen by his uncle Vortigern (Played by Jude Law). Unaware of this crime, Arthur is forced to live a very poor lifestyle. But once he pulls a legendary sword from stone, the clueless king is forced to find out who he truly is, weather he likes it or not.

With the director of the recent Sherlock Holmes film taking on King Arthur, a lot of intense stylization is added to this film including intence oversaturation, hard-core rock and slow motion. While this seems like it could work, it resulted in an epic mess. The modernized style doesn't work with the medieval atmosphere. The CGI is incredibly lacking, yet the film tries to have epic fight scenes with early 2000’s looking effects. Also the characters are incredibly underdeveloped leaving audiences to not have any feelings towards them. The characters motives and reasoning is also incredibly blurry. But the major problem with the picture is that it forgot to include a clear storyline for the audience. It is a jumbled mess that had everyone pondering “why is what i'm seeing on screen actually happening?”. There is no clear reason why characters think what they think or do what they do. Everything in the screenplay just doesn't make sense.

Now while the actors attempted to juggle this flop of a film, Charlie Hunnam (Also seen in Sons of Anarchy) stands out playing King Arthur. He is able to show some charisma in scenes making him the most likeable in the film. Some of the action is engaging as well. The effects just took the viewers out of the film.

Over all, King Arthur: Legend of the Sword could have been epic but when it comes down to what actually showed up on screen it was a hodgepodge of a film. There was so much going on in this film but yet nothing happening. The epic rock ‘n roll soundtrack didn't fit as well as the rest of the stylization and the story was just such a mess. This film is not worth your time.