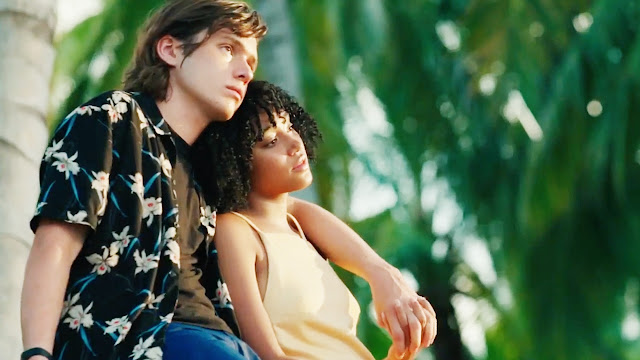 Release: May 19, 2017 | Runtime: 96 minutes | Rated: PG-13
Maddy Whittier (played by Amandla Stenberg) is just your typical average girl, living a totally normal life...besides from the fact that she's pretty much allergic to everything on the face of the Earth. Due to this unfortunate event, she is forced by her overprotective mother to live the rest of her life in a home with every filter and sterilizer possible. After teenage boy; Olly Bright (played by Nick Robinson) and his family move next door, it's love at first sight. But Maddy is now faced with the choice, to leave her house and risk death to be with the love of her life, or safely stay home and never get her chance to meet Olly.

The film is pretty much the Nicholas Sparks version of Tangled. Honestly it is one of the most conventional film I have seen in quite some time. While it does have its original twist on the genre, it lacks with having the typical formula of these type films. This lead to resulting in a unmemorable film. This movie is not garbage, it is just incredibly bland. It does not emotionally connect with the audience, as opposed to what is expected for these tear jerking flicks.

The direction by Stella Meghie was very dull, producing watered down performances by the cast. On the other side of the spectrum, the tone was very fun and upbeat. This fit the story perfectly. Now the plot of “Everything, Everything” was intriguing, the only problem was the execution. It was not very engaging. The characters did not seem to have much chemistry. Not really a good sign for a teen romance film.

While it seems that I am bashing on “Everything, Everything”, I did have a good time with this film... for what it was. It definitely was not anything special, but it was enjoyable. Like I said previously the direction and acting is very flavorless and sadly, this makes this film not too rewatchable. I do think that this film has a major audience and if you have interest in viewing “Everything, Everything” I would recommend you to go for it. You just do not need to be rushing to the box office opening weekend.

Rating: 2.3 out of 5
Based off the bestselling novel, Everything Everything brings us the latest sappy teenage romance movie. Following the life of a girl confined to her house due to an immune disease, we have to wonder whether the movie is worth leaving our own house for.

Diagnosed with an immune disease at an early age, Everything Everything follows the life of a teenage girl who has never left her house. As she describes, she is “allergic to everything”, and even a few minutes outside could have a devastating effect on her life. Yet when a boy moves in next door, she quickly realizes that a life without love, passion, and excitement may not be worth living.

For those of us that love a sappy, groan-inducing romance movie, you will not be disappointed. This film is the epitome of teenage love novel translated to the big screen. Everything Everything is the depiction of a teenage girl’s fantasy come to life. Yet for what it is, it does it well. The movie fully understands its niche and works within its confines. Clearly, do not expect a groundbreaking plot or award-winning dialogue. But the chemistry between the main characters is enjoyable, the scenario is different enough, and the movie really does make you feel for each of the characters. One of the highlights of the film was that it did try to include deeper themes and situations. Although it handles them somewhat superficially, which is to be expected of the genre, all of the characters deal with things that motivate them and that give the characters at least a modicum of depth. I also enjoyed some of the creative choices of the film – especially how it handled having the characters interact despite not being able to be in the same room. The way it handles texting and phone calls kept the film interesting but still made sense within the story.

Everything Everything had me hooked until toward the end. I truly wish the film had better handled the climax of the story. To avoid giving away spoilers, I will say that the climax was very jarring and felt completely out of place in the movie. If not addressed correctly, it should have been cut or edited out completely. The way the movie glosses over the biggest issue in the plot made it seem so out of place. Despite a poorly handled ending, Everything Everything is a great addition to the genre. It isn’t deep, it is cliché and cheesy, and it isn’t groundbreaking. But it is creative enough and sappy enough to make it a decent watch.