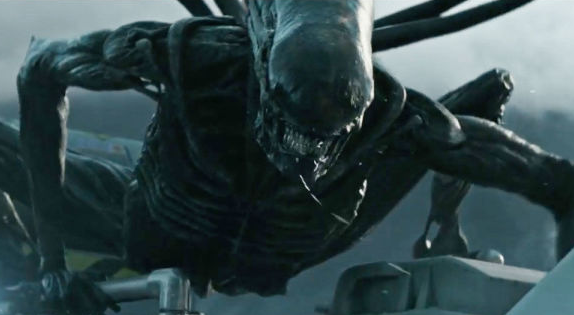 Release: May 19, 2017 | Runtime: 117 minutes | Rated: R
Although it may be true that in space no one can hear you scream, on Earth you can certainly hear the audible groan after the announcement of yet another Alien film. Four movies and one prequel later, Alien: Covenant marks the sixth edition of the Alien franchise. With Ridley Scott at the helm once again, we have to ask a simple question: will Scott be able to bring the series back to its terrifying height of Alien or will it be another terrifying letdown like Prometheus?

Ten years after the events of Prometheus and eighteen years before the events of Alien, this extraterrestrial thriller focuses on the voyage of thousands of colonists on their way to space to their new home planet. The crew is awoken when a solar flare damages their ship, but by some stroke of fate, they are awoken only a short distance away from an undiscovered hospitable planet. The crew decides to take advantage of their luck by exploring this new planet – the prospect of settling down seeming especially desirable when faced with the several-year trip to their original destination. Yet when the crew lands, they start to realize that something is amiss in a classic Alien twist of fate.

Alien: Covenant is a strong spiritual successor for the franchise. Although it suffered from a somewhat confused ending, the first half of the film truly invokes some horrifying scenarios. As a nice change of pace from its predecessor, the film makes the aliens truly feel like the crew’s biggest threat, as opposed to their own stupidity. As the movie really gets rolling, it ramps up the anxiety: characters die left and right, monsters start coming out from everywhere, and you are left wondering who is going to make it. Alien: Covenant offers a nice blend between the horror of Alien and the action of Aliens. And of course, Alien: Covenant pays us a little fanservice by giving us everything that makes us love Alien. The deaths alone are enough to make the movie worth the watch.

Where Alien: Covenant succeeded with its action and horror, it truly lacked in its story. Set in a world without a deep mythos or an intriguing mystery, an origin story for Alien once seemed like silly idea. Sadly, I find myself wishing it had stayed that way. Full disclosure, I actually enjoyed Prometheus for what it was. The movie was enjoyable and although it gave us more questions than answers, it at least opened the door to a deeper lore. And although Prometheus was too mysterious, it set up the rest of the series for exploration into these questions. As a result, Alien: Covenant is a terrible sequel for Prometheus. Covenant avoids answering almost any questions posed from the first prequel and brings up even more. Once again, we are left with even more questions than answers – which begs the question of whether the filmmakers are just adding “mystery” solely for the sake of covering up a poor story. I love a good mystery, but after a certain point, it stops being interesting and just starts feeling pointless.

Covenant also suffered for too much of a focus on the Androids rather than the aliens. A more apt name for the film would have been Android: Covenant. It just left me feeling like I was watching a Terminator crossover rather than a true spiritual successor. With very little continuity between the films, it makes it difficult to connect with any of the characters. The biggest question the prequel series has brought up is why do we even need a backstory? Unfortunately, this movie still does not give us a good answer.

Alien: Covenant coasts on the fact that it gives us plenty more alien types and plenty more alien deaths. In the end, it just ends up feeling “good enough”. Covenant has the ability to temporarily satisfy a craving for another Alien movie, but it once again feels like a hollow shell of what should have been.

Rating: 2 out of 5
Alien: Covenant is the latest chapter in the Alien series that follows the colony ship Covenant and its crew. When an unexpected ship malfunction takes place the crew must wake up from their planned seven year cryogenic sleep and locate a closer planet to recolonize. Soon after landing they learn they have to fight to survive on the uncharted planet which holds a dark secret.

If you're a fan of the Alien series or gore in general then you will most likely enjoy this movie. The director of the original 1979 Alien returns in this installment and doesn't disappoint in re-delivering the intense gore and suspenseful tones. That being said it felt like the majority of the scenes were already done in some form while watching with a few tweaks here and there.

In contrast with previous Alien movies, this film had characters did not feel fully developed and there wasn't really a time to get attached to them because the plot moved along so quickly. Also none of them really stood out with the exception of Danny McBride because he typically does comedic roles but did well in this sci-fi film and of course Michael Fassbender who returns as an android.

Fassbender does an excellent job at playing the older and newer model version of an android or "synthetic". His eerie vibe mixed with the silent nature of the planet they explore truly gives this science fiction movie a suspenseful tone. In many scenes I thought he was creepier than the over played Alien creature.

Though this movie is cliche and the majority of it is predictable, the secret of the planet and its danger is still disturbing. However, after this film I don't think there is much more left to be milked out of the series.