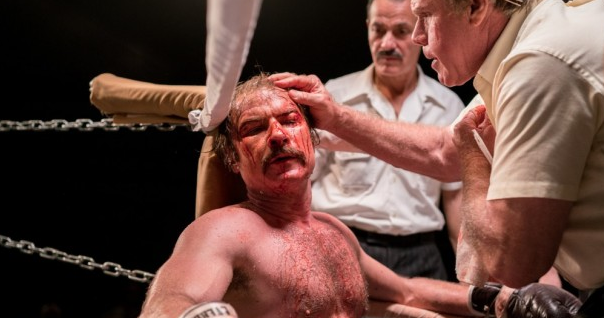 
Let me start off by saying this movie does have narration. Now if a movie needs to be narrated then the movie must not be able to be supported on it's own. The only issue is Chuck didn't need the narration. We were just hearing about stuff we were watching on screen. Seems like it got too repetitive.

Liev Schreiber was actually perfect to play the role of Chuck. We've already seen Schreiber pull off roles where he needs to beat people up and face different conflicts while on screen. Schreiber plays the tough character well, and knows how to put on a tough face.

Jim Gaffigan plays a surprising role in Chuck. I was hoping he was going to be the comic relief in the movie, sadly that was not the case. I had to watch a more stiff Gaffigan, a guy I'm not use to watching and a guy I hope not to see again in his next role.

Something that really surprised me about this movie was the sound track. So we already know that this movie is based in the 70's, but I didn't think the movie would pick all the hoppy songs that made the 70's the disco era we all know.

If you get a chance to watch this movie, I would go for a matinee. If you lived during this era, you might enjoy the movie more than someone who didn't witness this first hand.