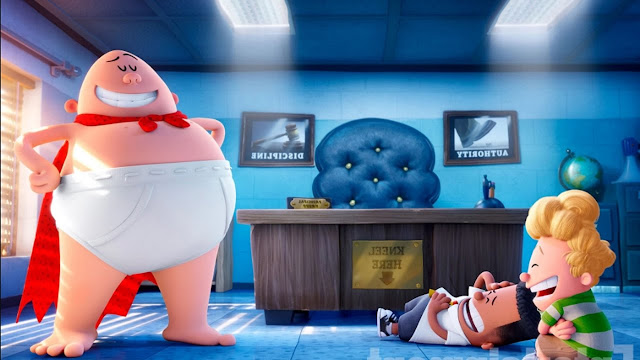 Release: June 2, 2017 | Runtime: 89 minutes | Rated: PG
Captain Underpants: The First Epic Movie brings to the big screen the popular book series that was once the number one banned books in schools across the United States. It follows two best friends in the fourth grade with super active imaginations and a passion for pranking that ends up bringing the superhero they create to life.

As a fan of the books growing up I was pleasant surprised at how well Dreamworks did with making a movie out of the gross out, juvenile humor that is Captain Underpants. I laughed several times as the main characters, George and Harold, broke the 4th wall and included viewers in their adventures from the start of the movie until the end. The way that George and Harold talked to viewers as a friend made it easy for kids to get drawn in and for adults to feel like a kid again.

I really enjoyed the variety of animation styles spanning from flip art to comic book to puppetry and more. It kept my attention because it was as if I was pulled into the mind of a 4th grader with a vivid imagination which helped tie in the story together.

The voice characters did a great job and I enjoyed the voice cast picked for the movie. With an all star comedy cast including Kevin Hart, Ed Helms, Kristen Schaal and more, their voices alone provided a comforting feeling that left me knowing I was in for a good laugh.

The humor of course is filled will potty jokes that had younger and older audience members laughing alike. There are also several jabs at the school system and other jokes on an adult level that will keep all ages engaged. There also is a good message about knowing how to laugh at yourself and learn that it's okay to do so.

I will say that I thought the movie started dragging out toward the end and a few of the younger viewers began to get a little antsy. There are laughs to be had however throughout the movie that kept majority of attention and you are most likely going to get "tra-la-la" stuck in your head.

Rating: 3 out of 5
The movie starts out like any typical children’s movie. Two best friends George and Harold (voiced by Kevin Hart and Ed Helms) spend their days using their imagination to create an epic comic book all while trying to avoid their grouchy principal, looking to discipline them for their constant pranks (Some of those pranks being quite ridiculous, it’s no surprise the principal doesn’t like these boys). One day, when the principal has had enough, the boys avoid punishment by attempting and succeeding to hypnotize their principal into believing he is their comic book hero Captain Underpants. Although, the boys do manage to hide their principal’s new spirited persona, all their plans are shaken a bit when a new teacher comes to the school with ulterior motives.

Personally, I was not a fan of this movie. Growing up, I was never interested in reading the books but coming into this movie, I still tried to keep an open mind. Still, I was not very impressed. While I did believe the animations were very colorful and pleasing, I was not that impressed with the storyline nor the jokes. While I did hear many giggles from the audience during my screening, they were mainly from the people under 10 years old. Growing up, my mom always told me there were two types of children’s movies: The ones both parents and children will like and the ones only children will enjoy that parents will hate to come to. I feel like this movie fell in the latter. Although, I am fairly young and consider myself to have a great sense of humor, there’s only so many times you can hear the word “Poopypants” without cringing every time it’s said… which was a lot in this movie.

The movie also felt a little dragged out and I did find myself yawning quite a few times wondering when the movie would end. With such a large cast of comedians I did expect more clever jokes, but considering the target audience had no problem with the movie’s humor, maybe I’m just missing the funny spark in my brain. Overall, although it was not that enjoyable to me, if you’re fine with corny jokes and are used to taking your kids to “the movies only kids will enjoy”, this will be a good one to take them to.