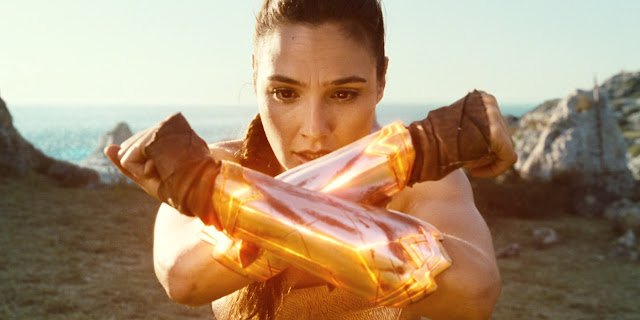 Release: June 2, 2017 | Runtime: 141 minutes | Rated: PG-13
Will the first-ever live action Wonder Woman film be as wonderful as we hope? With the bitter taste in our mouths still lingering after Batman vs. Superman and Suicide Squad, it is impossible to discuss Wonder Woman without asking if the latest DC film will break this comic universe out of its critical and fan slump. With a brand new backstory and setting, Wonder Woman offers us a slick, updated version of the superhero we know and love.

Wonder Woman is among one of the most recognizable superheroes in existence – and likely the most famous female superhero. Yet the latest take on the comic book star brings us back a decade and a half of the original’s origin story. In the throes of World War I, Wonder Woman, a princess from the Amazons, has her life on her secluded island disrupted when an American pilot crash lands in the sea nearby. Born to a fabled and secret society of female-only warriors created to pacify the world of men and to defend it from chaos, Wonder Woman realizes that she must set out to save mankind from its own violence.

Compared to DC’s latest string of films, Wonder Woman feels like a breath of fresh Amazonian air. In a time where many moviegoers are praying for a successful DC universe movie, the comic book franchise has time and time again fell short despite the world cheering it on. In contrast to the messy storylines, the shoehorned connections to the rest of the universe, and the poorly developed characters, Wonder Woman is able to break the glass ceiling to become a successful film. The movie still suffers from a few of the pitfalls of its predecessors, namely the over-the- top CGI explosion-fest towards the end of the movie, but it is still able to give us a compelling and satisfying story. The pacing of Wonder Woman seemed off at times – with a whopping two and a half hour runtime, the time spent in the Amazons and some of the exposition in London could have been cut. The lead up to the ending was also a little silly – while it seemed the film was delivering a deep, insightful message on brutality and war, it instead went with an ending with a comically overdone supervillain fight. Yet despite its less than satisfying ending and pacing that was a little off, Wonder Woman was able to overcome its DC-style mistakes.

Wonder Woman is a new and exciting direction not just for DC, but also for comic films in general. As the first comic book movie produced by a big-budget studio to be directed by a woman, and the first live action film with a female hero (disregarding Elektra… you know why), Wonder Woman gives us a compelling story with a feminine touch. The hero of this story proves that a woman really can do anything a man can do – featuring all of the same action and excitement that we would get in any other comic book film. The action in Wonder Woman was especially exciting – watching the Amazonians fight and Wonder Woman show off her brute strength was a highlight of the film. Some of the best scenes were watching our hero take down hordes of enemies. The female direction also did an amazing job staying true to the scantily clad costumes that would feel right at home in her print depictions without having any scenes that were overtly sexual or exploitative. Wonder Woman succeeds at portraying a good superhero, regardless of her gender.

The move from having Wonder Woman introduced to mankind during World War I rather than World War II enhanced the character’s backstory. The change helped set the story apart from its rival Captain America and also lent itself to a much more compelling story. Watching an outsider deal with the atrocities of a war with no right nor wrong created a much better story arc for our lead. Although I wish the film dredged itself deeper into the topic, it was still a nice change of scenery for the genre and added extra depth. Our lead’s motives and our understanding of the character is better fleshed out as a result. Yet despite its bleak setting, the film is still able to make light with a few good jokes and thanks to Wonder Woman’s naivety as an outsider to the world. However, perhaps the best decision was to avoid any Justice League crossovers. There are no shoehorned scenes or plotlines regarding other members of the DC universe, allowing a truly standalone film.

If Wonder Woman is any indication, the DC universe is headed in the right direction. Although they have not washed themselves clean from all of its past mistakes, Wonder Woman is a much-needed departure from its predecessors. The movie is a great achievement for female empowerment, but it also is an entertaining film on its own. But most of all, Wonder Woman is the film the character desperately deserved.

Rating: 4.4 out of 5
When the Amazon princess Diana's life is interrupted on the hidden island of Themyscira after a plane crash, she learns about World War I and its impact on mankind. She decides to leave her fellow female warriors and vows to use her power to defeat the god of war and restore peace.

Directed by Patty Jenkins, Wonder Woman brings back hope to the DC Extended Universe franchise as the title character is finally given a film worthy of her strength. The film kept well to the origin story of Wonder Woman and did not make her weak or overpowered by the male actors at all which was a pleasant surprise.

Although the film begins with a voiceover and a view of France that brings shuddering memories of where Batman v. Superman left off, Wonder Woman quickly takes another turn. Much to my relief it was just set up as a form of continuity because it still is part of a much larger franchise.

The film is a reminiscing point of present day Diana of events that led her to where she is today starting from her days as a child on the all female Amazon warrior island of Themyscira. Being her origin story, it included the elements of Greek mythology and did a good job of keeping up with Wonder Woman's actual roots. Her quest to defeat Ares, the god of war, is started after learning of the peril from the Great War to end mankind is told by her mother Hippolyta and leaves Diana with a unwavering need to fulfill the Amazons' duty to protect humans. From there the film tells an immersive story that will leave you wanting more despite the 2 hour and 21 minute runtime.

The fight scenes were intense and almost mesmerizing as woman and men alike kicked butt. Some of the scenes even included the Wonder Woman theme music faintly playing in the background which was a nice touch in my opinion. Also the antagonists including a German general (who also played the older William Stryker in the X-men films) as well as a chemist known as Dr. Poison did excellent as opposition to Wonder Woman.

There are also several comedic scenes that played well with the sexual tension that came from Diana having never met a man before. Much of the comedy also comes from the beautiful and outspoken "fish out of water" that Diana becomes because she refuses the idea that she is supposed to lay undercover as modest woman in Britain during the 1940s.

Wonder Woman is the much needed breathe of revival to the DC Extended Universe. It is arguably the best movie that it has released so far and leaves hope for better to come.