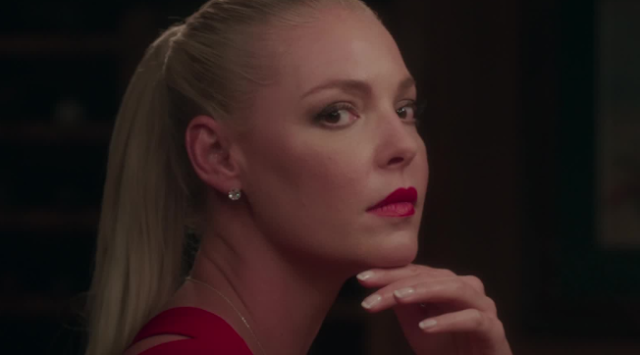 
When Tessa Connover (Katherine Heigl) and David Connover (Geoff Stults) divorce, they cope with it in different ways. Tessa has issues getting over the split and is especially protective of her daughter. On the other hand David decides that it is time to move on. He begins a relationship with Julia Banks (Rosario Dawson) resulting in David’s proposal. As Rosario is trying to figure out the new wife and stepmother role Tessa becomes very jealous. This jealously results in her doing everything she can to make Rosario’s life a living hell.

While this is a cheesy story line it could have been a enjoyable thrill, but what actually comes to fruition is an over the top, poorly pieced together film. To start the acting is not that abundant. Most noticeably is Katherine Heigl’s portrayal of the ex-wife Tessa. She brings the characters obsession of perfection to level one thousand and is just an incredibly robotic and unrealistic character. Tessa is so unlikable and controlling it leaves the audiences to ponder “why did David marry her in the first place?”. Speaking of David his character is purely muscle. He is so cliche and basic that anyone could have played his character. But in defence of the actors, they were working with a very poorly written script, including quite a bit of cheesy dialogue. The cinematography also is not to par. It just gives you a very bland image and seems like it could be from 2003.

Now while this film is not that well made, Julia Banks makes the best of it with her portrayal of Rosario. She's the only character with any character development, showing that she is having issues getting over a previous abusive boyfriend. Also the movie as a whole is entertaining enough to get through. It's definitely not a film to re-watch, but if you’re forced into watching it, you won't be checking your watch every five minutes.

Over all this Unforgettable does not deserve your money. The plot literally had the audience laughing at the screening, due to the over the top acting. Although this very cliche film has it’s decent aspects, they just are not able to outweigh all of the things going against the film. Sadly I can not recommend anyone to see Unforgettable.

The first thing I asked myself after watching this was, How much did Katherine Heigl get paid for this horrible movie? Im serious, comment below if you know. I can't believe she would do this without getting paid some high dollar amount first.

There are so many problems with this movie. I mean for starters, hasn't there already been a version of this movie in the past, like four times already. I know most movies now a days are just the same old junk, but I mean come on, can't we try a little harder.

Since we've seen this movie before, we, the audience, could already tell what was going to happen before it happen. Sometimes the audience ended up laughing at the screen because of how stupid everything was we were watching. I wonder if they can do a do over with this movie and just throw it out. Throw it out and start all over. That might just be best for this movie.

I wouldn't waste my time Redboxing this movie, let alone seeing it in theaters.