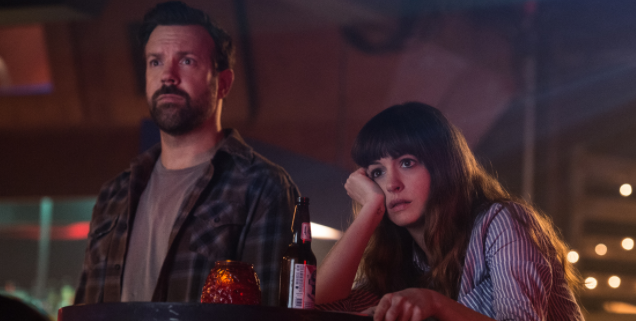 Gloria (Anne Hathaway) is a 30 something unemployed alcoholic living it up in New York until her successful boyfriend, fed up with her all night partying and all day lounging, decides to kick her out of his apartment and life, lecturing her on her addiction and complete lack of control and aim in life. Broke, homeless, and apparently friendless she returns home to her small town and takes up residence in her parents vacant (and totally empty) house. While wandering about town she runs into childhood friend Oscar (Jason Sudeikis) who never left home and now owns and runs the family bar he inherited from his father. He invites Gloria to join him for a drink and ends up offering her a job as a bartender. From here “Colossal” seems to be moving towards the cliche tale of an unfulfilled young woman floundering in the big city, dumped by the successful prick boyfriend, who returns home to her small town and learns how to appreciate it and the other small things in life with the help of the boy next door. But throw in a Godzilla-like monster for some sci-fi/fantasy and a couple hardcore drama twists dealing with addiction, abuse (physical and emotional/domestic and self), and the traumatic causes and effects of both, and this seeming rom-com becomes something else entirely.

After making the connection of her all night binges and following blackouts to the appearance of a giant monster terrorizing Seoul, Gloria finally begins to acknowledge the consequences of her actions as they affect not only her life but those of many others. Facing her demons, literal and metaphorical, is the only way to save herself and others from the chaos that ensues.

Hathaway and Sudeikis give impressive performances, with Hathaway demonstrating a mix of the personas of her many comedic protagonist/heroine roles with the drama and seriousness of her character in “Rachel Getting Married” and the amiable Sudeikis taking on a surprisingly different and more complicated role than we’re used to seeing from him.

A dark sci-fi/fantasy comedy dealing with alcoholism/addiction, unhealthy relationships, and metaphorical and literal monsters, “Colossal” is both entertaining and unsettling. Weaving together multiple genres, the real and surreal, and a little logic dropping here and there, it’s a refreshingly different kind of monster movie.