Can the star studded cast of sing out perform other animated features? 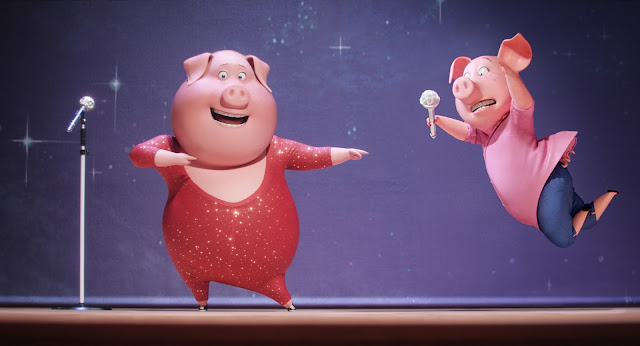 Sing is the story of Buster Moon (played by Matthew McConaughey), a doubtful dreamer, who has an extensive passion for the once grand theater he owns. Buster is faced with a lack of attendees, which over the course of his career, results in debt. Attempting to save his theater, he holds a singing competition. All seems well, until he realizes that there was an error regarding the amount of cash awarded to the winner of the competition.

This animated feature is definitely a fun ride. The music was a stand out, with varying records, from the early 1900’s to the hits of this day and age. The animation is also very well done. Illumination Entertainment has definitely been on their game ever since Despicable Me. One of the highlights of Sing is that it covers deep topics such as a bad break up, shyness, and an unhealthy marriage. Another focal point is Johnny (Played by Kingsman's Taron Egerton). He is an ape with a crime oriented father figure. Johnny is forced to follow the criminal behavior by his authority, and suffers being a disappointment to his father, with his passion for singing. Tori Kelly also gets her chance to shine, as the meek elephant Meena. She has a talent with her voice but, is too frightened to make it known. Sing was able to hit a deeper level than expected and that was due to exceptional performances from it’s star studded cast.

Sing at times fails to appeal to the whole family, especially adults, as compared to films like Zootopia or Finding Dory. The comedy is directly aimed at children, which won't be found humorous to the older crowd. Sing also struggles with a few unnecessary scenes that dragged out the film. If the film had cut out some of those scenes, it would have had a better flow.

Sing was overall entertaining and I ended up leaving with a smile left on my face. It did have its lack of appeal towards adults and some pacing issues, but the deeper topics it covered make up for that. There are better films for the family to enjoy but, children will find this film satisfying. It does have redeeming qualities that adults may find entertaining. I would recommend families to buy Sing on Blu-Ray, it is a good choice for a family movie night and is appropriate for everyone.

Like I said earlier, Sing really could have used more adult jokes, as opposed to the constant silly jokes for children. It also was too long and incorporated quite a few noticeable scenes that could have easily been cut. Sing should have had a more heartfelt tone, like what was incorporated at the climax of the film. With the relationship between Johnny and his father, as well as the breakup with Scarlett Johansson's character. If these topics were addressed more throughout the film would have improved drastically.
_________________________________________
Posted: April 13, 2017
Labels: Bluray Reviews17, CabellVildibill17
Newer Post Older Post
Subscribe to: Post Comments (Atom)
Subscribe to Mind on Movies for Movie Screenings and Giveaways.