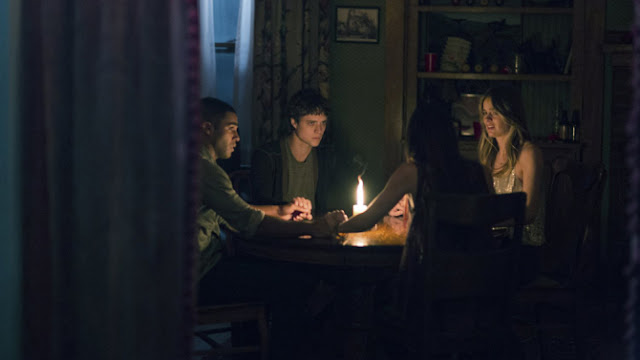 Elliot (played by Douglas Smith) has it all; a great best friend, a beautiful girlfriend and just moved out of the dorms, to a low priced mansion all for themselves. As they move into the new creepy house they start noticing strange occurrences. Eventually the three teens realize that this is not just a spooky house, but it contains the curse of a spirit. This spirit is the reason that humans commit unthinkable acts, his name is the Bye Bye Man.

“Don’t say it, don’t think it” I’d recommend just don’t watch it. While The Bye Bye Man does have an interesting premise as the plot thickens the film becomes worse. Right from the opening shot it has the vibe of a student film, turning off the viewers. The film is incredibly formulaic, grabbing plot points as well as good aspects from great horror films and smushing them all together, coming together with a hodge-podge of a flick. Not to mention how predictable it is, nothing stands out as original. This film brings up the topic of not knowing what is reality, which usually can be used for an entertaining twist. What actually come to fruition is a confusing mess, leaving the audience pondering, did that actually happen or does this film not have the nerve to actually let that happen.

The acting is very ammature at best. The three actors don't have any personality to them or anything to have the audience care about them. These college student acting is also very annoying and unlikable. With that they aren't able to carry this film. The supporting cast also stands out in their laughable acting. With this very poor dialogue, it would take a great actor with a lot of improvising to pull it off. The tagline “Don't say it, don't think it” becomes very annoying and hard to tolar during the feature. The practical effects are also very unrealistic. The Bye Bye Man’s costume looks like it was purchased for thirty dollars at a halloween costume store. The visual effects also particularly stand out, they look so fake and horribly interact with their environment.

Over all The Bye Bye Man knows what it is: another stupid horror film with an incredibly frugal budget. These cheesy PG-13 January release horror films have one target audience, teenagers who are probably going to make-out throughout the film. And as that it is understandable why this film is so laughable, because it serves its purpose. It is made so cheaply that it's guaranteed to make its money back. I can’t recommend this film to anyone who wants to sit down for an actual scary film.

Well The Bye Bye Man is a major trainwreck. If it had a stronger cast it may have been able to flow better, but it is also in desperate need for a script and screenplay rewrite. It is very campy and never had me scared. The thing with this film is that the filmmakers don’t really care too much about how well its made. They just wanted it to be cheap and quickly make its money back. If they put more money and effort into the making of the feature, it would have been much more tolerable.
_________________________________________
Posted: April 13, 2017
Labels: Bluray Reviews, CabellVildibill17
Newer Post Older Post
Subscribe to: Post Comments (Atom)
Subscribe to Mind on Movies for Movie Screenings and Giveaways.