We all know how she likes her steak...Raw. 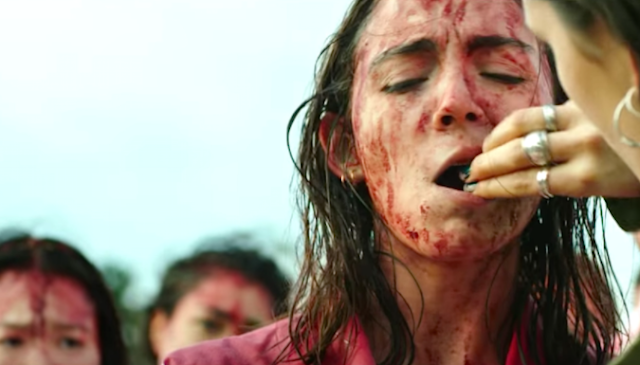 Raw is the phonomily disturbing tale of Justine (played by Garance Marillier) who is a vegan starting her first year of Veterinary school. Once she arrives on campus and settles in, all hell breaks loose when the seniors begin carnivorous hazing upon the freshman. Thriving to be a part of the crowd, she departs from her family ways by eating raw meat for the first time. The coming of age film shows Justine slowly becoming a flesh devouring cannibal.

Although Raw is incredibly well crafted, the gruesome nature of of the film will turn off some moviegoers. Julia Ducournau makes her first feature film directorial debut with Raw leaving audiences in awe. The French-Belgian film was released in many film festivals including the Toronto International Film Festival. During screenings of the of the feature, two guest fainted and over thirty had to leave the theater due to the disturbing nature of the film. With that said, Julia did a beautiful job directing and writing the unique picture Raw. The story was cleverly written and very intriguing (this is coming from someone who is not a fan of gruesome horror films), the cinematography was gorgeous and the acting was sensational. Garance Marillier (playing Justine) fits the role perfectly as the awkward sixteen year old freshman just trying to make friends. Countering Garance is Ella Rumpf (playing Alexia), who embodies her older sister, which has become apart of the world and branched away from her family's way of living life. The relationship between the two sisters is beautifully developed as Justine is pressured by Alexia but there is still love deep inside.

Movie watchers with weak stomachs will find this female led film is also incredibly disturbing. After Justine experiences raw meat for the first time, the one hour and thirty eight minute runtime becomes rough to get through. This is not due to being boring, actually it becomes very interesting but unsettling to watch. In comparison to films like “Ring” and “The Conjuring”, the gross imagery in Raw becomes the new definition of nasty.

The film is solid, aside from a couple few slow points. It was definitely not my cup of tea. Those who enjoy masterfully created films will appreciate Raw, if they can you can stomach the gruesome theme. This motion picture has a specific target audience and anyone who likes these films will love Raw.

Honestly there is not much I would change. The only thing that was not thought out well is how Alexia lost her finger. The scene was necessary but just didn't make much sense. Other than a few slow points Raw is fantastic.
_________________________________________
Posted: March 17, 2017
Labels: CabellVildibill17, Reviews17
Newer Post Older Post
Subscribe to: Post Comments (Atom)
Subscribe to Mind on Movies for Movie Screenings and Giveaways.