Review: Beauty and the Beast

Does this tale stand the test of time? 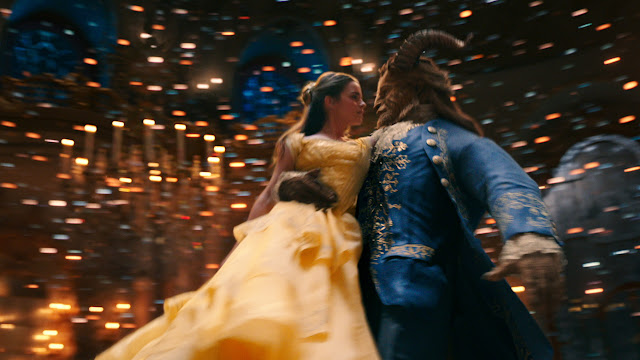 Beauty and the Beast is a tale as old as time… at least for anyone born within the last quarter century. But is this live action rendition enough to live up to the original that is a cornerstone of our collective childhoods?

This live action remake features the same story that we have all become familiar with: a selfish prince cursed to become a hideous beast until he can find true love, the servants who are turned into household items, and a small-town girl who dreams of a more meaningful life that finds herself a prisoner in the beast’s castle. Although the film remains extremely faithful to the original, there are some modern twists to bring in new audiences. The film features additional backstories for Belle and the Beast, new songs, and of course… a gay LeFou.

For anyone searching to relive the original, this movie will not disappoint. The movie follows the original formula to a fault. Although the creators made some “changes”, I was constantly aware of what the next scene would be and how it would go. All of our favorite songs remain unchanged, the characters remain largely intact, the costumes are strikingly familiar, and the joy and wonder of the original hold steadfast. Emma Watson in particular will make you do a double-take with how much she resembles the animated character. I did enjoy some of the changes, especially seeing Belle and the Beast fall for each other on- screen and some of the backstories, and the additions were small enough that they added to the film without changing the core story or themes. The movie is without a doubt a nostalgic, if not safe, homage to the original. Fans of the Alice in Wonderland remake and Maleficent will be displeased; Beauty and the Beast is not a groundbreaking, new take on an old story. It is nothing new, but that seems to be exactly what Disney was aiming for. Yet it was a fun, lighthearted foray back into a story that showcases the best of what Disney has to offer. This is without a doubt the best live-action Disney “princess” movie and it is a good reference point for future films in this field. Although safe, it was a well-executed and faithful take.

Beauty and the Beast was a delightful experience, but it was also nothing special. What made the film good prevented it from being a standout; it was too safe. Although it pleased me to no end to get to relive a defining childhood story, it also left me wondering: why even bother? I am happy to have seen the movie, but it only made me yearn even more for the original. The whole movie seemed more like an advertisement for the animated version more than a standalone film. I just kept thinking to myself “I really need to re-watch the original!” I do have to warn that I am a major skeptic of the recent de- animating of movies, and aspects of the film only re-affirmed my beliefs. The costumes felt more like a Broadway musical than a real, fully fleshed out world and the CGI only made me crave the freedom that animation brings to a film. In fact, I personally believe that the CGI in this film is not going to stand the test of time. Many of the characters lost their charm, the castle servants in particular, as a consequence of being CGI. The live action film just lacked the same charm that made the original so powerful. The singing was also extremely lackluster, and was one of my greatest disappointments. The music is what made the original, and the audio retouching done to many of the voices made it feel too safe and electronic - which I guess could be said about the film as a whole.

This rendition of Beauty and the Beast will not fully capture the magic of the original, but I am sure it will satisfy. It is fun, lighthearted, and is a wonderful homage to the brilliant 1991 version. But be warned, watching Beauty and the Beast only made me long for the original that much more. It was an enjoyable experience, but when I feel the urge for some “Belle” or “Be Our Guest”, I predict I’ll be dusting off the VHS player long before I give this version another watch.

Some of the changes in the film seemed pointless. When trying so hard to avoid changing any of the original story, any changes made are just going to seem tacked on. The enchantress taking a larger role in this movie was at first refreshing, but by the end of the film, it just left me wondering why even bother. Her presence changed nothing and neither added nor detracted from the story and only seemed to add to the runtime (which running 45 minutes longer than the original, this film did not need). Adding in a “Mr. Potts” seemed a little bit of a weird “happy ending” where it wasn’t needed. Cogsworth having a wife was also just… weird. And lastly, the Beast having a book that lets him travel around was an odd, poorly explained addition.

That said, I did enjoy some of the backstory. The original had some odd “plot holes” that never really seemed to matter, but it was neat that they touched on them in this film. For example, who was the Beast a prince of if no one even knew he existed? And how was the entire town unaware of a giant castle in the forest? And why did the poor servants get punished for the prince’s poor decisions? I liked having at least some kind of explanation and I also liked seeing a glimpse into the Beast and Belle’s past.

Speaking of changes, however… let’s talk about LeFou. I am a huge proponent of including LGBT characters into film, and I want so badly to give kudos to Disney for trying to push the envelope. Yet this attempt was just poorly done. The flamboyant take on “Gaston” seemed more like a stereotypical jest that was making fun of, rather than celebrating, the character’s sexuality. I would have preferred it to be a minor point of his character rather than the butt of several jokes. I found myself just feeling uncomfortable throughout some of his scenes. That said, I did enjoy the scene at the ball toward the end, and I wish that they had left it at that rather than making it an uncomfortable running joke throughout the rest of the film. LeFou was funny in the original because he was a fool, and I wish they had kept the character truer to that, rather than changing him to make a statement that pleases no one.
_________________________________________
Posted: March 17, 2017
Labels: JonathanJimenez17, Reviews17
Newer Post Older Post
Subscribe to: Post Comments (Atom)
New Reviews