Can this extraterrestrial bring new life to the big screen? 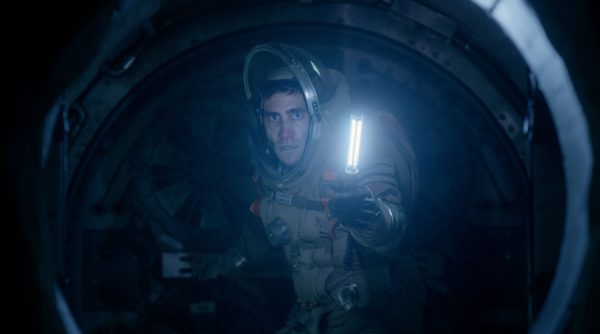 When life is discovered on Mars, a team of scientists aboard the International Space Station finally get to study the first sign of extraterrestrial life we’ve been waiting for. But before long, their new alien friend leaves each person aboard the ship fighting for their own life. Life is the latest installment in the classic Alien franchise finally revealing the origin of the Xenomorphs. Oh wait… that’s coming out later this year? Uh… well then, Life reveals the origin of a totally- not-Xenomorph as it hunts down the members of the crew that seeks to research it.

Aboard the ISS, a team of scientists prepare to study samples from a Mars rover that show rudimentary signs of life. But when they set out to study this primitive lifeform, things start to get out of hand as it rapidly evolves. The movie begins with the wonder of scientific discovery that captivates the world and slowly evolves with the lifeform into a science fiction horror flick as they realize that this discovery may not be as wonderful it first appeared. As hard as they try to contain this newfound monster, it breaks free and sets out to feed on the members of the crew. This ensemble finds themselves in one of science’s most basic lessons: the survival of the fittest, with the only option of killing the alien or being killed themselves.

Life succeeds most in its faithfulness to science fiction. The writers actually seemed to take the time to do some basic research! Although it still falls for some of the same tropes we’ve become accustomed, and even though there are still moments that are sure to make you roll your eyes, we should be fair and not pick apart everything as there is still a story to tell. That said, overall most of the cast was logical and rational. It was refreshing to see scientists that didn’t make the dumbest decisions imaginable. And many (but not all) of those moments that normally would make you groan had at least a somewhat believable reason behind them. Many things in the film actually seemed well thought-out, from the way they move around in space to the containment protocols (finally!).

So let’s be honest – we’ve seen a million and one movies about evil aliens out for blood. And although Life does not rise above other films such as Alien, it certainly does seem like it could have been an origin movie for the franchise. Especially if we just forget about Prometheus… and seeing how Prometheus doesn’t even bear the Alien moniker, it seems like the studio would rather we all forget all the same. What is intriguing about Life is that where Prometheus aimed too high, Life is a simple and more down-to- Earth (and logical!) take on the genre. This film contained the horror that is essential to the genre. The entire film I had a sense of dread looming overhead and my heart was beating out of my chest. I felt uneasy throughout the entire film, finding myself closing my eyes because I was overcome with anxiety.

Yet the film fell short of becoming a true monument of the genre. Life got a lot right, but not enough to make it a classic. Yet some choices felt a little cheap. Naming the creature “Calvin”, for one thing, was distracting. At first, the choice seems cute and funny, but hearing the cast yell “OH NO, CALVIN’S OUT” as they run for their lives just cheapens it and makes it feel like a parody. Additionally, despite having big names like Reynolds and Gyllenhaal that seem suited for a big summer blockbuster, the two actually take relatively supporting roles in the middle of a small ensemble cast. Although this lends itself to the film by making us unsure of who is safe (if anyone), it also seems like a blatant cash grab considering they got top billing and are on every advertisement surrounding the film. One of my biggest complaints regarding the film, as that the ending was not as good as the majority of the film. Characters start to lose their rationality and the creature gets too smart and powerful. The film starts cutting suspense for the sake of just wrapping up the movie and it all just starts getting rushed, forgetting the core strengths that made the movie great. Yet my biggest complaint is that Life just didn’t bring new life to the genre. Don’t get me wrong, I actually really liked the film, but was it fresh and innovative? In some ways yes, but not in most. I loved that it was smarter and more fleshed out. But this is a story we have all seen, and at times done better. The comparisons to Alien are apt as it really seems like a giant tribute to the franchise.

In the end, Life is a fun, suspenseful take on the genre – and if you feel the itch to see a science fiction horror film, this should satisfy that itch. And if Alien: Covenant takes some cues or is in the same vein as this movie, I think that we are going to have a great year ahead of us. Just don’t go in expecting an earth shattering film turning the genre on its head, and definitely do not go into the film expecting a Ryan Reynolds/ Jake Gyllenhaal duo flick or you will be sorely disappointed. But the film does enough right and enough just slightly different enough to make it an entertaining watch.

Ryan Reynold’s character was an odd choice. Having him die so soon in the film obviously “raised the stakes” but it also seemed like a transparent attempt to do so. It was very Drew Barrymore in Scream. What really annoyed me, however, was how irrational his character was. Granted, he is portrayed as more muscle as opposed to the other brainy scientists… but he was still an engineer trained by NASA and chosen to go to space. I just didn’t buy it. They should have found another way to move the plot forward rather than someone’s stupidity.

And let’s talk about the infamous ending. Part of me wants to love it for being somewhat brave. As an optimist, I was pulling the entire time for a happy ending. But the moment that their final plan actually seemed to work, I knew that something was up. And this made it almost too predictable. Although I guessed wrong, I still expected an alien to end up on Earth – I just expected it to be a second alien that stowed away in the other escape pod. I do commend the ending, because when I found out what really happened my heart sank. But it still wasn’t wholly unpredictable. What I think would have been more interesting decision would have been if they cut the film a few minutes shorter – leaving us to wonder what really happened.
_________________________________________
Posted: March 24, 2017
Labels: JonathanJimenez17, Reviews17
Newer Post Older Post
Subscribe to: Post Comments (Atom)
Subscribe to Mind on Movies for Movie Screenings and Giveaways.