Can Chips deliver the funny or fall on the pavement? 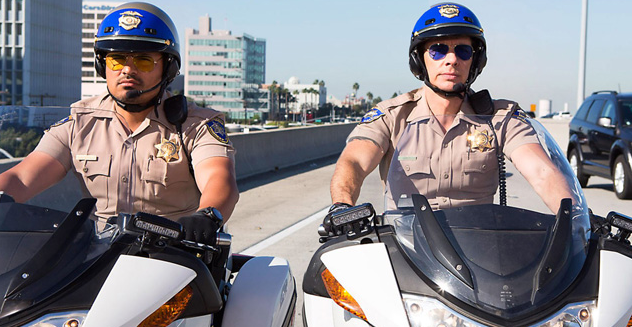 So let me start off with a disclaimer, as I feel it's important to do. I did not go into this movie (Chips) knowing what the original was like. I never saw the television show, and I only know the idea of what the original is about.

That being said, after a quick IMDB search, the original TV show was on in the 70's. As we all know, TV back in the day isn't as good as TV today. They couldn't curse as much, they couldn't do any nudity, no ideas of what goes on in the bathroom.

Well if you're a fan of the original, I would steer clear of this version.

It's not that it was a bad movie. It had it's laughs, it has the raunchiness you expect to grown men could create in an R rated movie. It's just something that we've seen before. It's a movie about cops solving a crime, with nudity. That's all I really saw. Now yes, I did laugh a lot in the movie, but that's only because this movie is bringing the comedy minds of children together to create the jokes.

If you don't end up seeing this movie, don't get mad. If you've seen any other movie with Dax Shepard, just pretend that you've seen Chips, and tell people the synopsis of any other Dax Shepard movie. They won't know the difference because I am sure they themselves haven't seen Chips either.

Stay through the credits for some extra funny scenes.