He may be a baby, but he thinks like a boss. 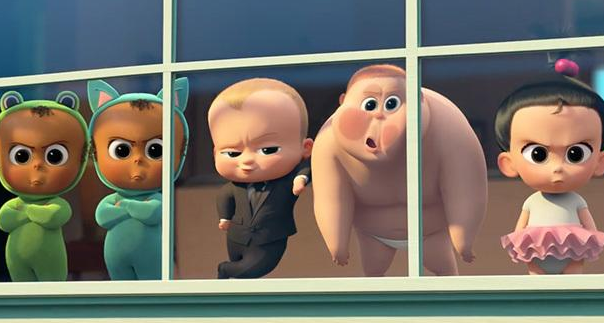 Inspired by a children’s picture book, The Boss Baby is a family comedy about a 7 year old boy named Tim and his rivalry with the new family arrival, The Boss Baby (voiced by Alec Baldwin). Originally an only child, Tim initially becomes jealous by his new little brother who requires constant attention. Tim then becomes suspicious, when he realizes his new little brother is a suit-wearing, talking baby with an interesting agenda.

Going into this movie, I was a little optimistic. I love children’s movies as much as I love rated R movies so I was hoping to laugh as much as all the other 5 year olds I was watching this film with. I ended up laughing a total of 4 times, which isn’t bad for me because I’m tough at comedy movies. This movie had it’s pros and cons just like any movie. It’s a good movie to bring your children to that won’t make you wanna roll your eyes out of boredom because there were some very clever “adult-like” jokes that kids wouldn’t understand but you would. But it’s not the kind of movie that leaves such a lasting impression, you’ll want a sequel for.

The movie is told from the point of view of 7 year old Tim, who is frankly very spoiled and very imaginative. There were many fantasy scenes and half of the movie was focused on the rivalry of the two brothers which may be relatable to many families. But with a cast list including Alec Baldwin, Jimmy Kimmell, and Lisa Kudrow, I was hoping for a bit more jokes.

If your child is begging you to see this film, it’ll be a good movie to pass the time. But don’t expect it to be the next classic family film.

In my opinion, I felt there were too many fantasy scenes which kind of made the movie a little confusing on what was real and what wasn’t. Just when I was starting to take the adult route and assume everything in the child’s head was fantasy, the entire mission scenes towards the end really made it difficult all over again. (Was the baby really wearing a suit the whole time, the world will never know)
_________________________________________
Posted: March 31, 2017
Labels: ArielAguilar17, Reviews17
Newer Post Older Post
Subscribe to: Post Comments (Atom)
Subscribe to Mind on Movies for Movie Screenings and Giveaways.