Just how many songs will get stuck in your head watching La La Land? 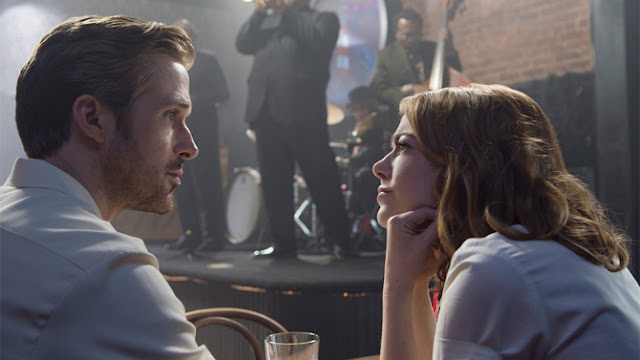 La La Land is a movie about aspiring actress Mia (Emma Stone) who meets Sebastian (Ryan Gosling) who is a musician that is determined to make jazz as popular as it once was. It explores what it takes for the two to follow their dreams in the city of Los Angeles that is known for crushing dreams and is also known as La La Land.

First things first, if you do not like musicals then do not go see this movie. The movie literally starts off with people sitting in L.A. traffic and getting out of their cars to perform a song through their vocals and dance.

If you’re like me though and enjoy a good musical then this movie is for you. I thought the soundtrack was fantastic and actually fit with what was going on during the movie instead of just cramming in a song/dance just to fill up the time. Also since Sebastian was trying to bring back the jazz scene to L.A. there were several scenes that included real jazz musicians and at one point I had to catch myself from clapping when a song was over because it was that mesmerizing.

Also the romance was perfect. Emma Stone and Ryan Gosling are no strangers to the romance genre and have even played each other’s lover in two films prior to this one. Their chemistry was great on screen yet again and I love how their humorous sarcasm turns into an almost sickeningly sweet relationship that somehow you can’t get enough of.

This tale of boy meets girl and the duo fall in love worked really well in this movie because it puts you in the mindset of when you have a real crush and the giddy, bubbly feelings that come with it. I’d say this is a film to see in theaters because it’s a good mix of a modern day musical with romantic-drama.