Does Collateral Beauty hold up as a beautiful masterpiece? 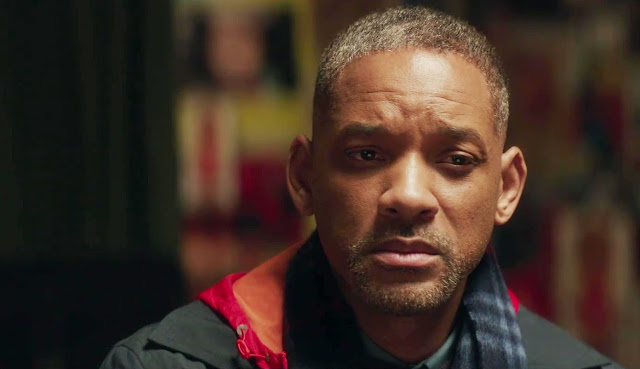 After sending three letters to the cosmos, a man coping with the death of his daughter shockingly receives an answer when he is visited by Death, Time, and Love themselves. Or so he thought. But will the film make you love the time well spent in the theater, or will it get you wishing for a swift death from the misery the movie brings?

Collateral Beauty centers on the lives of four people as they all try to grapple with major life-changing events occurring within their lives. When the CEO of a successful marketing company suddenly finds himself mourning his own child’s death, he ends up shirking his duties as CEO for several years, forcing three executives in the company to step up and try to find a solution. With a once in a life time opportunity to sell the company, these three executives are forced to find a way to remove the CEO from the picture. The three end up hiring stage actors to play the cosmic entities that the CEO had written hate mail to in order to convince the board that he was too crazy and too preoccupied with coping to handle his duties. Playing death, time, and love, these actors end up teaching the CEO lessons on how to cope with the loss of his daughter, and end up teaching the three executives some very important lessons along the way.

While the marketing made the film seem more akin to a whimsical, life-lesson flick like Stranger Than Fiction or Groundhogs Day, this movie fell short of being the next It’s A Wonderful Life. Collateral Beauty suffered from its writing, sounding like it was written by a marketing team rather than a writer’s room. While the film had some tongue-in-cheek criticism of the marketing industry with “shed your skin, find your life”, it contains a lot of over the top platitudes that push it too far beyond being believable and relatable. The film hits the audience over the head with its message and lacks the subtlety that a film like this truly requires. The film’s largest transgression, however, was the central reason for the plot. The three executives that try to paint the CEO as out of touch are supposed to be his best friends. Which makes it all the more shocking that they would purposely try to make a man grappling with his own daughter’s death feel like he is losing his mind. Although they try to fill in the backstories that would make this a logical decision for these characters, it is not enough to make their actions redeemable or okay. The entire plot made me feel uneasy. Especially for a feel-good, self-realization type of movie, this plot really gets in the way. The plot isn’t far enough to the farcical side to make it a dark comedy and isn’t far enoughto the serious side to make it a heavy drama, which makes the entire storyline feel out of place.

This isn’t to say that the film has no redeeming qualities, however. As odd as the plot may have been, there were still light moments that I thought were charming or funny. Helen Mirren in particular lit up every scene she was in. And as hard as it is to admit, I am an absolute sucker for these types of films. Parts of the film really did move me and I heard several tears in the theater as well. Overall, despite its flaws, I actually still enjoyed myself.

Overall, this film is certainly not going to be the next big, classic Christmas movie. It was underwhelming considering its cast and marketing, and was lacking a lot of the magic and whimsy I would have hoped for. But it’s still an enjoyable movie. Don’t expect anything beyond a superficial sap-fest, but if you’re like me and love these types of films, I still think it’s worth a shot.

I am torn on how I would handle Death, Time, & Love. Part of me wishes they didn’t hit us over the head so much with how they were real. The film lacked subtlety. Who could honestly be surprised that they are real when they so conveniently paired Death with a dying man, Time with a woman racing against her biological clock, and Love with a recently-divorced man attempting to reconnect with his daughter. We get it. And while the film does not attempt to hide it at all, it still tries to treat the big “reveal” like a twist. I was half expecting them to NOT be real specifically because that would have been a much bigger twist. If the filmmakers wanted to commit to keeping it a secret,they should have at least tried to hide it from us or give usreasons to question it.
On the other hand, I wish they hadn’t tried to hide it from us at all. I think had they just introduced these characters as who they really are, it could have been a much different movie that would have made it much more relatable. Making them upfront about who they really were could have introduced more magic to the film and elevated it. It also would have (hopefully) completely removed and replaced the storyline of three friends who backstabbed their best friend who can barely function after losing his daughter.
Most importantly, though… what happened to the $20,000 that they gave Death, Time, & Love!? I mean… they’re obviously real… so… why did they take the money!? Death literally took $20,000 from a dying man that literally just confided in her that he was worried how his family would support themselves after he died… why!?
_________________________________________
Posted: December 16, 2016
Labels: JonathanJimenez16, Reviews16
Newer Post Older Post
Subscribe to: Post Comments (Atom)
Subscribe to Mind on Movies for Movie Screenings and Giveaways.