Do you remember the Trolls being disturbing? 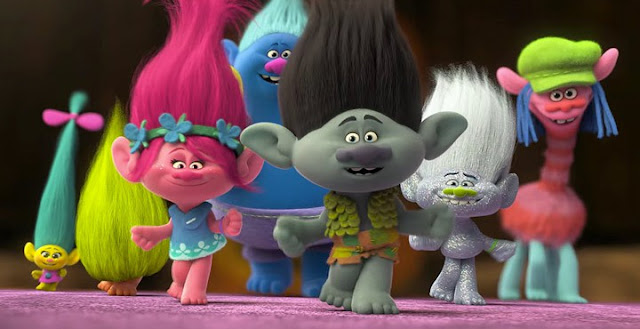 The tiny, well-liked Troll dolls are brought to the big screen in this movie that follows today’s trend of bringing back popular entertainment brands to theaters.

The Bergens are large, monster-like creatures that believe eating the Trolls on a holiday called “Trollstice” is their only way to be happy. For 20 years the Trolls find a safe haven free of their nemesis until they are eventually found and some are taken back to the land of the Bergens. Can the princess of the Trolls save her friends from being eaten? I must say that this movie made the Trolls look cute because the real life dolls are on a fine line of being cute/creepy. It also had the perfect level of jokes that were for kids and adults alike. It was a good mix of innocent jokes mixed with sarcasm that made the Troll’s journey more interesting.

That being said some of the jokes were slightly disturbing and in my opinion not appropriate for children. These jokes were far and few in between, though I heard several children and adults gasp at how shocking it was that the movie went there. Don’t let this discourage you however, because this film was really funny and is great to watch in theaters because the songs will have people dancing in their seats and the feeling is infectious. I also loved the fact that they mixed in classic rock songs that added adult humor to keep the grown-ups entertained which was hilarious.

Make sure to stay after the credits because there’s an extra scene at the end that’s worth sticking around.


The dark and morbid tone in some of the scenes, for example one of the Bergens burying themselves with a headstone that read “Here lies me”. This is a children’s movie for goodness sake but at least there were only a few scenes like this.
_________________________________________
Posted: November 04, 2016
Labels: AshleyBell16, Reviews16
Newer Post Older Post
Subscribe to: Post Comments (Atom)
Subscribe to Mind on Movies for Movie Screenings and Giveaways.