Will Moana make you set sail for the theater? 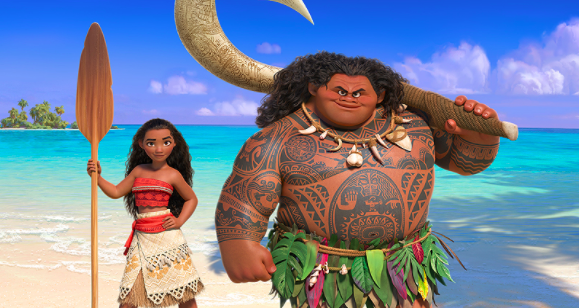 Moana features the latest installment of Disney Princess – err, chieftain’s daughter – movies. In other words, get ready for ballads, adventure, laughs, and a little bit of heartbreak.

The movie tells the story of the Demi-god Maui’s attempt to steal the power of creation, setting off a chain of events that threaten the livelihood of a Polynesian island. Moana, the chieftan’s daughter, decides to sail out and find Maui to return the power of creation to its rightful owner – breaking her parents’ wishes and setting sail off the island for the first time in thousands of years. This daring adventure forces Moana to learn the way of her ancestors, to challenge herself to be strong enough to lead her people, and to brave the dangers of the ocean.

Compared to the rest of the Disney Princess movies, Moana finds itself as a much more upbeat addition to the ensemble. Although the movie does have a bit of heartbreak, the mood of the film is much lighter, carries less stakes, and is more reminiscent of other Disney films outside of their “Princess” line. The film seems more aimed at kids than it does their parents, evidenced by their inclusion of the annoying chicken sidekick.

However, I found this to be a breath of fresh, open ocean air. The movie was funny and the main characters really nailed the parts. Additionally, it was nice to just have an easy, upbeat movie to sit back and enjoy, bringing us back to those worry-free days we had as children. Where the movie most shines, however, is its setting. Moana is an amazing change of scenery, featuring a brand new environment that Disney had yet to explore. The animation is absolutely gorgeous and several parts of the film truly took my breath away. It takes a lot of skill to make the ocean feel like its own lifelike character, and is a great testament to how the environment was truly brought to life by Disney’s animators. The setting, characters, and the whimsy that surrounded it all seemed to fit and truly paint a tapestry, creating a fully-fledged and deep world. Watching Moana set sail across the open ocean captured that great sense of adventure that I felt as a child and I found myself cheering for her the entire way.

The music in the film, an essential part of any Disney animation movie, however, did not shine. There was one song that I absolutely fell in love with, and a few more that I liked – but it is nothing compared to Frozen, Beauty and the Beast, or Little Mermaid. The background instrumentals throughout the movie were incredible and often stole the stage from the film’s ballads – which although it speaks to the film’s amazing orchestra, it does not bode well for the film’s signature songs. Many of the songs were simply forgettable, and some – like Maui’s/ The Rock’s as well as the song by the evil crab thing – just fell flat. To be fair, however, it seems like the film’s music was more of an afterthought, which is fine and it succeeded in spite of its soundtrack.

Moana is an amazing change of pace, a gorgeous film, and an incredible, upbeat adventure. Although your kids will likely have more fun than you will, it still succeeds in being a lighthearted film for the whole family, and is still one of the better Disney films – especially within recent history. When you’re spending time cuddling with your family this cold winter, I encourage you to take them to see this film and bring a little island warmth into all of your lives.

Okay, let’s be real. I sang Frozen for months after I first saw it, and yes, I downloaded the soundtrack. So I am a little disappointed to not have another song to test my singing skills with. I wish they had put more effort into the music. I believe that had the soundtrack been better, I don’t think I would have a single complaint about the film!
_________________________________________
Posted: November 23, 2016
Labels: JonathanJimenez16, Reviews16
Newer Post Older Post
Subscribe to: Post Comments (Atom)
Subscribe to Mind on Movies for Movie Screenings and Giveaways.