Can Brad Pitt win an award with Allied? 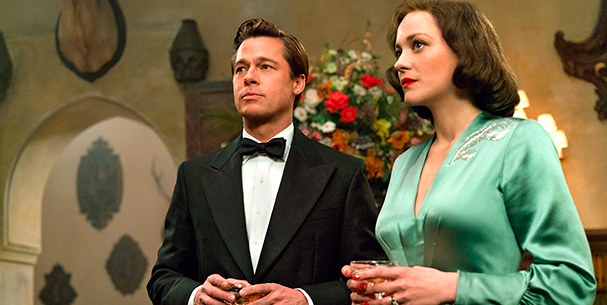 Allied features the temptation of two spies but is this thrilling love affair enough to tempt us to see the film? Or maybe all that buzz about the Pitt-Jolie break up has you reminiscing about Mr. & Mrs. Smith and you’re hoping this will satisfy that itch.

Allied centers on spies sent to assassinate a Nazi ambassador in Casablanca during World War II. Under cover as husband and wife, the two find themselves actually in love. But the idyllic life that the two create in England after completing their mission starts to falter as the two realize their marriage may not be all they were expecting it to be. Accused of being a spy, Marion Cotillard’s character is being investigated by her own husband, played by Brad Pitt. The movie centers on discovering the betrayal, secrets, and mystery surrounding them as they seek to answer whether their marriage is another facade brought on by espionage.

Although the trailers may lead you to believe this is a spy thriller, this movie is really more of a war-torn love story. There may be a layer of intrigue and mystery, but this is not a fast-paced action movie in the slightest. The movie is long and steady, and features very little actual spying. Allied focuses more on the relationship between the two leads. Marion Cotillard truly carries the dialogue in the film and is the reason the film doesn’t fall flat. I was also happy to see an actual French speaker playing the part. The movie also had a lot more funny moments than I would have expected from the genre, which was a pleasant surprise.

The film truly shines when it ramps up the stakes rather than focusing on the minutiae of their relationship. The beginning of the movie is especially riveting and really sets us up for a much more interesting movie than we got. Too much of the film is spent setting up a relationship between the leads, which really slows down the mystery and makes the movie drag on. This focus is not completely unjustified, as the movie features a compelling ending that required a lot of the slower exposition to truly make it shine. But overall, Allied is lucky to have several scenes in particular that pull the film out of the “forgettable” pile.

Allied has some pretty amazing peaks in an otherwise slow movie, which makes it an enjoyable watch but it doesn’t quite reach the benchmark of being a must-see. The ending alone, however, is worth a watch and I think Marion Cotillard certainly deserve praise for her portrayal. If you’re looking for a movie with any real mystery, this is not going to be for you. Instead, set your expectations for a World War II love story rather than a spy thriller.

One of the most blaring issues I had with this film was that they really didn’t seem to care about the mystery at all. It becomes apparent extremely early that Marion Cotillard’s character really is a spy, and the film does not do much to try to hide that fact, completely ruining any intrigue that the film could have had. I can at least somewhat forgive this because of how the film handles this revelation. The truth is the mystery never really was whether she was a spy; it was about whether she actually loved her husband. But that doesn’t mean that I have to like the direction the film took in this regard.
Secondly, I would have just completely removed the final scene. We did not need an exposition about what happened after she died. The movie tries to end on a positive note – probably to avoid truly depressing its audience. But at that point, I feel if the film wants to commit to a dramatic ending, it really needs to commit. This was no happy ending, and I think trying to tack one on as an afterthought took away the power of the second to last scene.
_________________________________________
Posted: November 23, 2016
Labels: JonathanJimenez16, Reviews16
Newer Post Older Post
Subscribe to: Post Comments (Atom)
Subscribe to Mind on Movies for Movie Screenings and Giveaways.