Enter to win The Secret Life of Pets on Bluray!
Mind on Movies is very excited to announce that we are working on the upcoming Blu-ray release, THE SECRET LIFE OF PETS, starring Louis C.K., Eric Stonestreet and Kevin Hart. 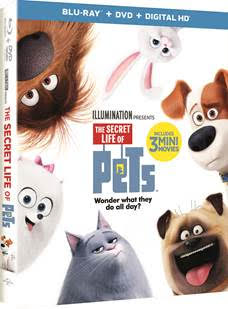 SYNOPSIS: In their fifth fully animated feature-film collaboration, Illumination Entertainment and Universal Pictures present The Secret Life of Pets, a comedy about the lives our pets lead when we leave for work or school. Max, voiced by Louis C.K., is a loyal terrier living a perfectly happy existence until his owner, Katie (Ellie Kemper) brings home Duke (Eric Stonestreet) a big, boisterous mutt she finds at the shelter. When Max and his unruly new “roommate” slip away from their dog-walker, they find themselves lost in the urban jungle of New York City. In an attempt to stay ahead of animal control and a rebel band of abandoned pets led by an unhinged bunny named Snowball (Kevin Hart), they put aside their differences to survive the epic journey back home.

Own The Secret Life of Pets on Bluray and DVD on December 6th!


a Rafflecopter giveaway
Disclaimer: Only one entry per mailing address per giveaway. The prize will be sent via FedEx or UPS. No P.O. Boxes please. This contest is from Mind on Movies working with Universal. The entries will be checked. You must do what it says on the widget option to enter to win.
Posted: November 18, 2016
Labels: Expired Contests
Newer Post Older Post
Subscribe to: Post Comments (Atom)
Subscribe to Mind on Movies for Movie Screenings and Giveaways.