Enter to win an Admit-Two Pass to see The Nutcracker Nationwide!
Mind on Movies is very excited to announce that we are working with Fathom Events on Bolshoi Ballet, Direct from Moscow, The Nutcracker, in selected theatres on Sunday, December 18th 12:55PM! 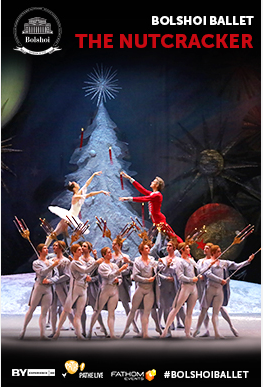 Special Fathom Features: A special production captured from the Bolshoi Ballet in Moscow, Russia.Fathom Events, BY Experience and Pathé Live are delighted to bring the timeless holiday classic, The Nutcracker, performed and captured LIVE from the Bolshoi Ballet in Moscow, to select cinemas nationwide on Sunday, December 18. On Christmas Eve, Marie’s wooden nutcracker doll transforms into a beautiful prince who takes her on a magical journey. Before they leave, they must confront the Mouse King whose army is threatening Marie… Christmas would not be complete without the enchanting tale of young Marie and her Nutcracker prince! Danced by the Bolshoi’s principals, E.T.A. Hoffmann’s fairytale staged by Russian ballet master Yuri Grigorovich will transport children and adults alike to a world of magic and wonder for the holiday season.


Enter below to win!
a Rafflecopter giveaway
Disclaimer: Only one entry per mailing address per giveaway. The prize will be sent via FedEx or UPS. No P.O. Boxes please. This contest is from Mind on Movies working with Fathom Events. The entries will be checked. You must do what it says on the widget option to enter to win.
Posted: November 20, 2016
Labels: Expired Contests
Newer Post Older Post
Subscribe to: Post Comments (Atom)
Subscribe to Mind on Movies for Movie Screenings and Giveaways.