Review: Fantastic Beasts and Where to Find Them 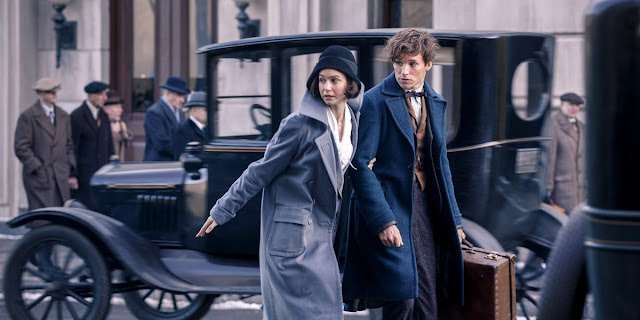 Fantastic Beasts and Where to Find Them brings back the magic of Harry Potter.

Fantastic Beasts and Where to Find Them is the story of Newt and his beasts. It stars Eddie Redmayne and Colin Farrell, along with a decent cast that you will definitely want to see return to the screen in the sequels. The good thing about Fantastic Beasts is it finally brings the magic to America, and America needs it. It is not based in England or at Hogwarts like in the Harry Potter series.

If this movie was starting all by itself, without the fact of Harry Potter, I'm not really sure if this would be picked up with a big following for the movie. Harry Potter was all about the magic, and what harry could do with the magic do defeat you know who.
Fantastic Beasts is more about the animals, and what they can do. Although of course there is magic in the movie, it just isn't a 'solely' thing in the movie.

This movie has the right about of visual aides to where if you are thinking you should see it in 3D, you would be right. So many things are coming at you in the movie, that in 3D it will add that effect into the movie. It is also so well done on how they created the beasts in the movie. When Newt is touching the animal, the effects are so good, that you can see the feathers are brushed while he pets the beast.

To those of you from the Harry Potter era, of course you should go and see this as soon as you can in the movie theater. Your friends will and then they will spoil it for you. You need to be the friend that spoils it for your friends. You know everyone is going to see this movie though. So don't be the last one that hasn't seen it.

They should have had someone in the movie from Harry Potter. People would lose their mind if that happen. It would have made the movie just tat much more special then. I also didn't like Newt and Tina ending up together. Now you can say, 'well now they can make a sequel' but I wanted a happy ending with them going off to England together.
_________________________________________
Posted: November 18, 2016
Labels: BillyJoynt16, Reviews16
Newer Post Older Post
Subscribe to: Post Comments (Atom)
Subscribe to Mind on Movies for Movie Screenings and Giveaways.