Who is John Trost?


Mind on Movies had the chance to chat with John Trost, who acted, directed, and wrote the new movie Wet and Reckless. Read below to see what he had to say. 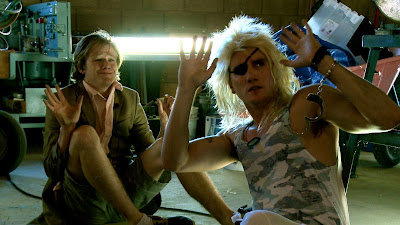 MonM- Your new movie Wet and Reckless is set to release on VOD this Friday. Describe the movie in 5 words.


MonM - Not only did you star in W&R but you also directed and wrote it. Which do you prefer doing the most and why?


JT - And edit, and score and blah blah blah. I think I prefer acting the most because it's the least amount of work ha. But editing/directing is probably the most rewarding in the end because you have this DVD on your shelf that's all yours, whether it's good or not, it's kind of like inheriting a child. Sometimes it's a good kid, sometimes it's a bad kid, but you're always proud.

MonM - Your dad (Ron Trost) has worked on a lot of movies. What was your favorite set you have been on growing up as a kid?

JT - My favorite set definitely had to be "Mortal Kombat Annihilation". Say what you will about the movie, but I was ten years old and I loved Mortal Kombat more than anything. I got to try on costumes, watch my Dad blow stuff up and hang out in England and Thailand. If I was never on that set I never would have met my good buddy James Remar and I never would have thought to make this movie (Wet and Reckless) in Thailand. Runner up was definitely "Rushmore" though.

MonM - Is your dad why you got in the movie business?


JT - Absolutely. I grew up on movie sets. My dad had a camera, I had GI JOES, the rest is history. It's like when people's Dads are cops so they're cops and they're kids are cops. My Grandpa was also a rad First AD back in the day, and before the grandparents there were stunt men in silent film. I'm stuck in this world, I've known nothing else. It was never a question of, "Did I want to work on movies". It was, "Which position do I want". Obviously I'm still having trouble deciding just one.

MonM - If you weren't in the movie business, where would you be?

JT - Probably living in a tree or a box somewhere.


MonM - A side note, I believe I saw you in the new comedy This is The End, who is the funnier actor out of the guys?

JT - Yes you did.  That was a blast. Thought they're all very funny. But Danny McBride owns. He's probably the nicest funniest guy ever. I remember he just came up to me one time, unprovoked and told me for five minutes how much he loved my movie The FP. I was definitely star struck knowing Kenny Powers dug my movie. 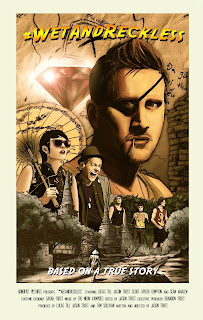 You can Rent/Download Wet and Reckless with 8 deleted scenes at the link below.
https://vimeo.com/ondemand/wetandreckless