Can a bald Matt Damon act in a good movie? 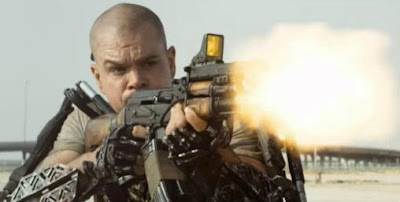 Elysium starts off with a scene where you have to read the history about what  happened in the world. Now I know some movies have this and they turn out well, but there was no need to have this for Elysium. Pretty much everything you read was something you already knew from the trailer or was explained from the movie at the start.

This movie will make you want to learn to speak Spanish or French. Most of the people who lived on Earth, the unwealthy, spoke Spanish and most who were rich and lived on Elysium spoke French. So you may want to invest in some Rosetta Stone.

The technology in the movie was very realistic for the future. Some movies make some technology so far impossible that you know it's not believable. Most of the stuff you would want to have and would use.
For some reason they decided to add some gore in this movie. It was too much gore for my taste that they could have easily edited some out.

There are some parts of the movie that you won't want to actually look at. I would recommend just closing your eyes. It will just weird you out. 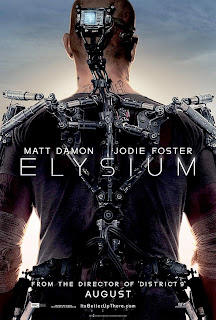 I wouldn't have had Matt Damon die at the end. There should have been a way to make him live. They had all those machines that would heal just about anyone and keep people alive. I would have made that daughter Matt Damon's. It only seemed right to have made her his daughter.