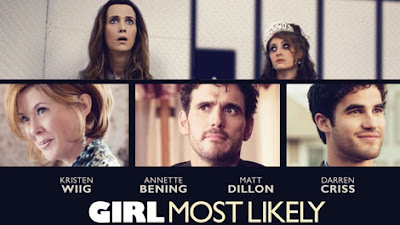 The new movie Girls Most Likely is not a movie I would run out and see. Heck, it's not a movie I would take the time to watch on a movie channel in the comfort of my own home and watch it for free. While watching this movie you will understand everything I'm talking about.

From the beginning of this movie, you can predict what will happen. Typical story of a girl who gets dumped by her boyfriend, has no money, and is forced to movie back with mom. There's a little more in the movie too, that I don't want to spoil.

Frank (Steve Carell) is a scholar of French author Marcel Proust, temporarily living at home with the family after a suicide attempt because his boyfriend broke up with him.
Imogene (Kristen Wiig) is a playwright who stages a suicide in an attempt to win back her ex, only to wind up in the custody of her gambling-addict mother.

The saving grace in Girls Most Likely is Darren Criss. This really is Darren Criss's first main role in a movie since his Glee debut. He is the only character that brings any laughter onto the screen. Without him, you would just keep thinking about Little Miss Sunshine during the movie. 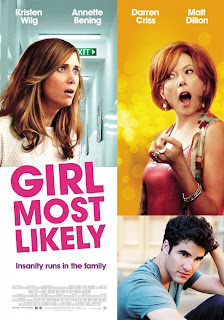 Well I would have just cast Steve Carell and made a spin-off. It would have been really enjoyable to watch. Add more screen time with Darren Criss. Also, they should have had Kristen Wiig's character fall in love int he end, rather then weirdly putting on lip stick. Odd ending.