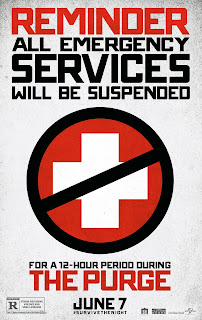 The Purge is not set to far in the future. Which is odd, because most everyone who sees the movie will live past the date The Purge actually starts. Its like those Back to the Future movies, when its now the future and there's no hover boards in sight. The Purge was actually much better then I thought it would be. Don't let anyone fool you and tell you its scary or a horror movie. This is nothing like the sort, however there are some times you will jump.

Its really just a typical wealthy family who tries to live another 12 hours during the Purge. There's the normal family problems, like the girl is dating someone that the father disagrees with because hes older. But when there is a Purge in sight, who knows what will happen.

This movie was actually short and sweet, with a run time of one hour and twenty-five minutes. So there is not that much added drama to the mix of the movie. There is kind of a twist in the movie, yet I was able to see it coming. Let me know in the comments if you saw the twist coming also. This movie you actually may want to see in the theaters, just because it was short and to the point. Although the audience I was with was very chatty and you could hear many people shushing others.

Also CLICK HERE to enter our The Purge prize pack contest were you could win a t shirt of The Purge.

What would I have changed? (Spoilers)
Well I would not have made the dad die at the end of the movie. I was cheering for all of them to make it and live in the end. I would have also liked to know who the new founding fathers were, and what made them actually create the Purge. Also, they didn't want to send out the homeless guy to get murdered because they felt bad for him, yet they killed all of those prepy kids, seems kinda odd.