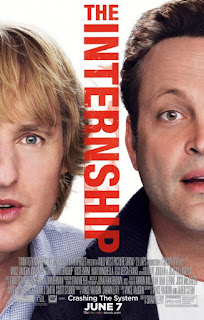 This movie will make you want to work for Google. Some will say this movie was just a big advertisement for Google, as it kinda was. I already love Google, so I'm not going to say anything bad about it. This movie was more then just Google on screen for two hours anyway.

This movie had the duo from Wedding Crashers back. Owen Wilson and Vince Vaughn. With some great cameos in the movie of old friends. The question people ask is, Can they pull it off again? I say yes. This movie was actually really funny, and it also had the same kind of romantic-ness involved in it like Wedding Crashers.

Owen and Vince do a good job with there comedy aspects. As they tried to related to everyone, by referencing the eighties, and today. They also made you want them to get the job at Google. And they brought a team of misfits come together. It keeps you involved in the movie and actually wanting to watch it.

What would I have changed? (Spoiler)
Well this movie had a lot going for it. I may have made Will Ferrell in it more then the little bit he was. Also John Goodman was in this also. And he had more screen time then Will did. Also the movie had some flaws. For Owen and Vince to actually intern for Google, they had to be attending a college. And Vince was able to add them to a university (online) really quick and lie about what they were majoring. Why wouldn't Google check into there back round?
Posted: June 07, 2013
Labels: Reviews13
Newer Post Older Post
New Reviews