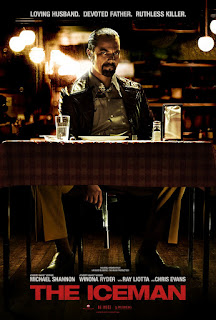 Since most people won't know what this movie is about, I'll add a synopsis.

The true story of Richard Kuklinski, the notorious contract killer and family man. When finally arrested in 1986, neither his wife nor daughters have any clue about his real profession.

I walked into this movie knowing this and James Franco is in it. Well this movie was very well told. As Richard Kuklinski (well played but Michael Shannon) was a heartless killer. And Shannon just did that. He had a cold side to him that I could see how he had no soul to be capable of all those murders. But Shannon also made you feel for the character. Because he was a family man.

This movie is a true story and Richard Kuklinski murdered 100 people in his career as a hit man. These actors made the movie more then the story of the movie. As they added to much gore in the movie for my personal taking. Shannon was very true to the character. Side note, James Franco is in it for only 3 minutes.

What would I have Changed? (Spoilers)
This is based on a true story. So I can't change the actions of the characters. But I was told that in real life Richard Kuklinski had a son, yet in the movie he only had 2 daughter. As Shannon could care more for the daughters then a son. I feel they should have added the son, to see how he would be influenced by his dad. I would have also added more screen time with James Franco.
Posted: May 17, 2013
Labels: Reviews13
Newer Post Older Post
New Reviews