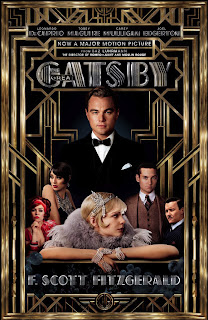 Old Sport was said in the movie at least 100 times (this is a guess, I did not actually count). The Great Gatsby was visually colorful. But it was way to slow for any living soul in the movie theater. Some senior citizens even fell asleep during the movie.

The sound track is what keep me awake during the movie. I actually wish Jay Z and Beyonce were in the movie. Their versions of their songs were really well done in the movie.

The movie was also a bit long. In the middle they just slowed down what was happening and it should have just been edited out.

I saw this movie in 3D, and it was a waste. Do not see it in 3D as it is hardly even noticeable. Also don't see this if you don't like being narrated to about whats happening while your watching what is actually happening. Tobey Maguire's character Nick Carraway was just writing his book aloud for all to hear (including us) while we watched what was happening. This only happen in certain parts.

What would I have changed? (Spoiler)
I thought it was very odd that there was not one cameo in this movie. I would have added one. Maybe Jay Z could have been the guy playing the trumpet in the movie. That would have been nice. I would also try to cut out at least thirty minutes. It was very long and drawn out.
Posted: May 10, 2013
Labels: Reviews13
Newer Post Older Post
New Reviews