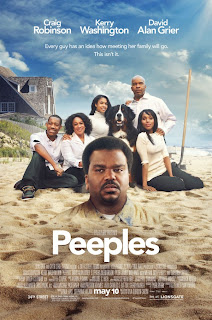 Let's see... Peeples is a disappointment all the way through. This movie is more predictable then a movie that already has a book about it. All of the "funny" scenes were just in the trailers you have already saw. Craig Robinson is really the only person who adds the funny to the movie.

This of course was a Tyler Perry original. Right down to the movie actually being called Tyler perry presents: Peeples. It had its highs and lows, then went in for the family lesson and ended up with... spoiler.... them all in love and a happy family.

What would I have changed? (Spoiler)
Well you could have just cut the whole movie and played that family sing a long at the end to sum up all of the movie. They could have actually thought about the comedy that they were going to put in this rather then just throw stuff in there cause it seemed to fit the joke going on.
Posted: May 10, 2013
Labels: Reviews13
Newer Post Older Post
New Reviews