Did you watch Mr. Rogers growing up?
Well you maybe seeing him on the big screen soon. 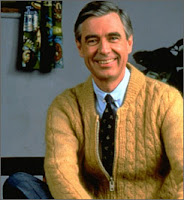 A film about Rogers, who passes away in 2003 at age 74, is in the works at Treehouse Pictures based on a script by Alexis Jolly, a staff writer on The Ellen DeGeneres Show, Deadline.com reports.

Of course the name of this movie would be called A Beautiful Day in the Neighborhood.
"His keen ability to find the good in anyone, or anything, will make for a truly inspiring cinematic experience," producer Justin Nappi says of the film.

But who could pull off a good Mr. Rogers?
Let me know below.