Now You See Me


Is magic actually in Now You See Me? 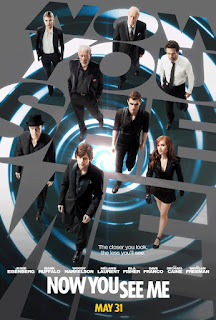 Well there is some "real" magic in the beginning of the movie. But as the movie goes on, it turns into "movie magic," which means its magic that can't be done without the magic of Hollywood and all there affects can do. But it still was really good.

It is actually really hard to notice the answer to the tricks in the movie, until the end when all is reveled.

This movie was able to pull off the casting really well. As they had good chemistry off of each other. Jesse Eisenberg, Woody Harrelson, Dave Franco, and Isla Fisher are the magicians in the movie. As you already know, Jesse and Woody have already worked together in other movies such as Zombie Land. So you already know they work well together.

This movie was so cleverly done correctly, that you will not know how they do any of it till the end. And there is a twist in the movie that you will not see coming. I recommend you seeing this one in the theater. This is just so no one spoils it for you while you try to wait for DVD.

What would I have changed? (Spoiler)
I would have like to know what the four horsemen were doing for the year before, just learning the tricks and how to rob a bank. Also was Mark Ruffalos character a cop the whole time or what. How would he fool the police into becoming a police officer.
Posted: May 31, 2013
Labels: Reviews13
Newer Post Older Post
New Reviews