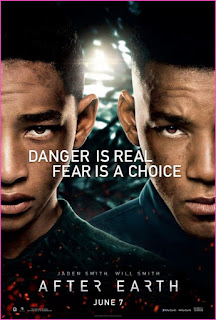 So I guess in 1000 years we are going to have an odd accents. If you can't stand a different accent that's not English-American Style, then you may not want to see this movie.

After Earth should have been called After Will, because it seems like Will Smith is pushing his son, Jaden Smith, to become the next big movie star, which he is not ready for. This movie was just something to show everyone how Jaden can act.

This movie is to predictable. If you have already saw a trailer for it, you already know whats going to happen. Your options you could do is wait to see it on cable, or until 1000 years and compare on how far off it is from what may really happen in 1000 years.

What would I have changed? (Spoiler)
Well when you have a big name like Will Smith in a movie, you expect to see him more involved in the movie. So they should have used him more in the movie. Also, why couldn't Senshi Raige, Will's daughter in the movie, fit in the bubble with Kitai, Jaden. There was plenty of room, they could have both lived.