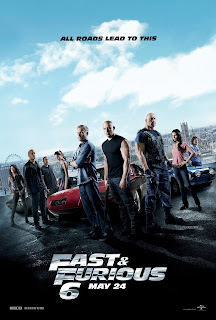 Is this movie only about fast cars?

As the other movies, this is about fast cars and that's all. You're not there to see the story line, mainly because its no good, but to see all the stunts and fast cars that are in the movie. The stunts seemed overly impossible to me. But the stunts were really well done. And The Rock is more involved in the story line here.

If you can, catch it on DVD to see how they made all the stunts in the movie. Some of these stunts were really amazing to see, and question me on how they were done.

This movie did keep me entertain throughout. So it did have that aspect. I would recommend waiting to see this one on Redbox. as you should not run out there and see this first thing when it comes out. Unless you are a huge racing car fan, then see this immediately.

Make sure you stay after the credits. There is a scene leading you to the seventh installment of this movie.

What would I have changed? (Spoiler)
I would have had a better dialogue between the characters. As they seemed flat to me. Also at the end with the plane on the runway, they must have made that runway run 5 miles long. As the plane was never able to actually take off the ground during that whole scene. So I would have made it more realistic and have the plan take off sooner.