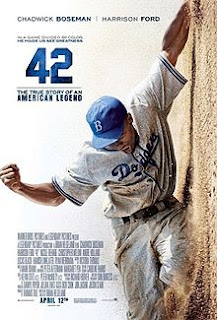 So you weren't around in the late 1940's to know how exactly Jackie Robinson was put into baseball, but that's ok. Check out this new movie of Jackie Robinsons' life. This movie starts off letting you know history on the sport and African Americans involvement, or none there of, in the sport. This movie is really great, not just for the baseball fans, but for all.

Harrison Ford was the best actor in this movie. He did a really great job acting as the manager of the Dodgers. I was very happy with Harrison's performance in the movie. This movie had a lot of highs and lows. The movie showed all the impact that Jackie had on baseball when it was mainly a white sport.


What would I have changed? (Spoiler)
Really there is nothing you should be able to change, since this movie is based on real events. But something different I would have done would be, show the series game with the Dodgers. They kind of just left it where we don't know if they won or if they lost. I would have just showed real footage of the game and just the ending score. Because even now, I still don't know if the Dodgers won the game or not.
Posted: April 12, 2013
Labels: Reviews13
Newer Post Older Post
New Reviews