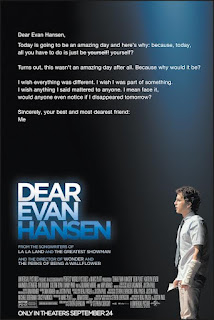 - The breathtaking, generation-defining Broadway phenomenon becomes a soaring cinematic event as Tony, Grammy and Emmy Award winner Ben Platt reprises his role as an anxious, isolated high schooler aching for understanding and belonging amid the chaos and cruelty of the social-media age.

Directed by acclaimed filmmaker Stephen Chbosky (The Perks of Being A Wallflower, Wonder), the film is written for the screen by the show’s Tony winner Steven Levenson with music and lyrics by the show’s Oscar®, Grammy and Tony-winning songwriting team of Benj Pasek & Justin Paul (La La Land, The Greatest Showman).

'Dear Evan Hansen' is in Theaters on September 24th, 2021. This film is based off the Broadway play of the same name. I have not watched the play, but that is not needed to feel the emotions this movie pulls on you. A live version may make you feel even more, and plays can be longer since they have an intermission, so there's more story to it. This film does just find in making you feel.

The breathtaking, generation-defining Broadway phenomenon becomes a soaring cinematic event as Tony, Grammy and Emmy Award winner Ben Platt reprises his role as an anxious, isolated high schooler aching for understanding and belonging amid the chaos and cruelty of the social-media age.

You have to remember this is a musical, so when they start singing in the movie, that's what they are conversating to the other characters on screen. The music doesn't take away, it's involved in the movie and the story. Just pay attention to the songs and you'll understand the story even more.

I will say some of the acting seems a bit forced. Of course this movie deals with a touchy subject, but some acting could have at least had more heart in the character. The main characters, like Evan, were perfect though.

There are a lot of different themes going on in this movie. Some are easy to spot, others are more hidden. This actually works well with the movie, since it has a lot of moving pieces and you need to adapt to what is going on, on screen.

If you get a chance, for sure see this movie in the theater. Most critics are hating on this film, but if you get some popcorn and go for the catchy songs, and the emotions this movie brings, you will enjoy the movie and find yourself liking it.