'F9: The Fast Saga' has Space Cars and More! 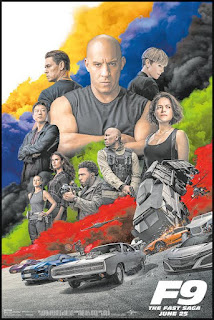 - No matter how fast you are, no one outruns their past. F9 is the ninth chapter in the Fast & Furious Saga, which has endured for two decades and has earned more than $5 billion around the world.

'F9: The Fast Saga' is in Theaters June 25th, 2021. If you’re a fan of over the top explosions, impossible stunts, and scientific law breaking movies, the newest Fast and Furious installment is your movie. I am going to remind the reader that you do not go into a Fast and Furious movie expecting to see realistic stunts. You go in knowing that each sequel is going to be as equally ridiculous as the previous one, and then multiplied. That being said, I am going to be reviewing this movie based on the other films in the franchise, and not by other movie standards.

F9 seemed to have less stunts overall than the others, but the stunts that were in it were far more outrageous than anything done before. I would say it balanced itself out. Everything we know about science can easily rip apart the movie but there is absolutely no fun in that if you think too hard on it.

Story wise, this honestly might be my favorite. Call backs to the previous movies, loose ends being tied up effectively, and the potential to have one of the most satisfying villain deaths. Some of the writing is a bit sloppy. It seems like they take the story line one movie at a time, rather than planning it out, and then they have to do damage control later on when it doesn’t add up.

Without giving anything away, I am honestly looking forward to seeing how they plan to do the next film, because you just can’t beat what happens in F9. Regardless of how you feel about the franchise it’s a good starter movie when going back to in person theaters. Be sure to stick around for a mid credit scene that you don’t want to miss!

Jazzlynn Myre (Contributor) is from Dallas. She's an avid gamer and watcher of anime. She usually spends her time either taking pictures of her cats, rewatching every horror movie in existence, or reading about crazy people doing crazy things.
Click Here to check out Jazzlynn's Articles.