'A Quiet Place Part II' is another quiet hit! 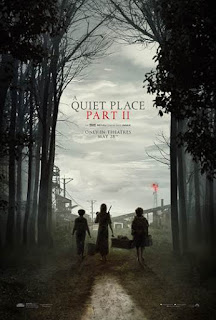 - 'A Quiet Place Part II' Review Following the deadly events at home, the Abbott family (Emily Blunt, Millicent Simmonds, Noah Jupe) must now face the terrors of the outside world as they continue their fight for survival in silence. Forced to venture into the unknown, they quickly realize that the creatures that hunt by sound are not the only threats that lurk beyond the sand path.

The long-awaited sequel to John Krasinski’s A Quiet Place is here and I’m happy to report that Part II does not disappoint! Bringing back the original cast, and adding Cillian Murphy, Part II forces the Abbott family off of their farm and into unknown territory to seek refuge after the events of the first film.

Emily Blunt is rock solid in this film, just as she was in the first. The addition of Cillian Murphy, who’s role was more prominent than I imagined, was a phenomenal choice. He is great in the film and helps broaden the world that was built in the first, while still keeping it completely grounded. Noah Jupe is also great again as the son Marcus, but just as in the first film, the standout is Millicent Simmonds. She is so fantastic in Part II, getting an even more prominent role than in the first, and she does nothing but knock it out of the park!

While the plot of Part II is once again pretty simple, it’s executed beautifully by Krasinski, using the characters to move us forward with every scene, never going for spectacle over character moments, and those decisions truly make these movies shine. Understanding that if the audience cares about the people on screen, they will be invested throughout the movie and until the very end. This is a skill that Krasinski has already, while many big directors continue to struggle with across Hollywood. Krasinski thinks of these movies from the perspective of the family, and it really shows.

Overall, I really enjoyed A Quiet Place Part II. If you can, definitely watch Part I again prior to seeing this one, they make a fantastic double feature! Check this out in the best theater you can find, sound is very important in these films! I hope we can get more from this world in the future, I’d be there day 1!