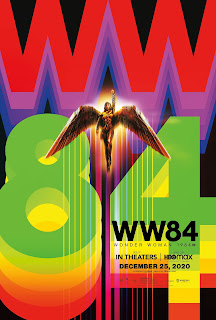 'Wonder Woman 1984' might be one if our only exciting popcorn movies of the year, and you won't want to miss out on it for that reason. While some people will see the movie has flawed, and filled with plot holes, or something stupid that it doesn't make sense, those people didn't have the big bucket of popcorn.

Fast forward to the 1980s as Wonder Woman's next big screen adventure finds her facing two all-new foes: Max Lord and The Cheetah.

The characters were the strongest part of the film. Gal Gadot is still the perfect Woner Woman, she just knows how to look good, be strong, and give the audience what they need from a Wonder Woman. Chris Pine does return, and the film does explain why he's back, it's just a stupid reason.

I will say Pedro Pascal was the perfect bad guy for this movie. He knows how to be bad, and he carries himself on screen to give us the bad guy we want to make this movie exciting. Kristen Wiig did play a character she normally doesn't play. She was an awesome strong villian, but she does fall flat in the end of the movie, but maybe that's for reasons not explained.

This movie has a strong start to the movie, and the middle act keeps you entertained and interested to want to know more. The ending of the movie is where you lose the excitement and it just becomes blah. The fighting just dies off, seems like they just rushed the ending to tie a bow on the movie and make it an easy end.

This is the type of film that needs to be enjoyed in a theater with the largest bucket of popcorn you can order. I do understand what's going on in the world, some theaters are still closed, others are open but no concession sales are allowed, some are fully open. The excitement of this movie will only be enjoyed in theaters with popcorn, with a large audience. Once you start missing one or both or all three of those, you'll join the people who ended up not liking this film.

Billy Joynt (Editor) - Billy has seen many movies over the years. He enjoys comedies and anything action, including the summer blockbuster movies. You can follow Billy on Twitter here.
Click Here to check out Billy's Articles.