'Soul' has a lot of meaning, but is it too much? 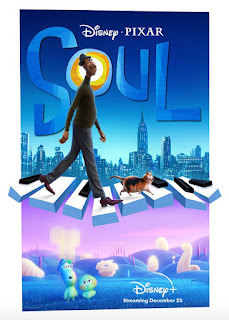 - Read Logan's review of 'Soul' A musician who has lost his passion for music is transported out of his body and must find his way back with the help of an infant soul learning about herself.

'Soul' is on Disney+ on December 25th, 2020. What a strange year it has been, but now we have a new Pixar movie coming to Disney+ on Christmas Day. That film is Disney Pixar’s Soul, starring Jamie Foxx and Tina Fey!

Soul follows Joe Gardner, a middle-school band teacher whose lifelong passion has been to become a profession jazz musician. Voiced by Jamie Foxx, Joe is a character I think we can all relate to at some point in our lives. Living a life with a routine, day job that isn’t as fulfilling as we all thought it might be. Through a series of very unique events, he finds himself hanging around a character named 22, voiced by Tina Fey. 22 is a soul that has been waiting thousands of years to be prepared for life on earth and has pretty much lost all interest in ever living that life.

Soul gives us a great dynamic between someone who has everything to live for, but can’t be in their own body, and someone who has a body waiting for them to begin their life, but no interest in living it. I had a lot of fun with these characters. Plenty of laughs and a fish out of water scenario for each of them at different points of the movie, which I almost always tend to enjoy.

I could be alone here and hope that I am, but I could definitely see people finishing Soul and being upset with their lives up to this point, but not feeling motivated to make any changes. It’s an interesting theme to play with and I think they could’ve executed things differently to make it more fulfilling for the audience. They decided to do things differently, take some risks, and although they didn’t pay off for me personally, I will always applaud originality.

Overall, Soul was a funny, beautiful, animated film that almost seems to be aimed more towards adults than children. I loved the characters, thought the music and sound throughout were phenomenal, and just felt like they didn’t stick the landing in the end. I most definitely enjoyed myself though and would love to hear your thoughts after you see the film!