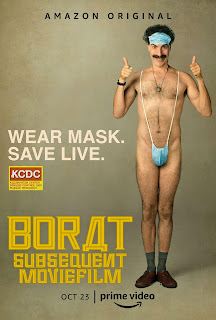 'Borat Subsequent Moviefilm: Delivery of Prodigious Bribe to American Regime for Make Benefit Once Glorious Nation of Kazakhstan' is available on Amazon Prime on October 23rd, 2020.

By now we’ve all seen the original Borat movie and have an idea of what we’re getting into with a sequel, but do we really? Sacha Baron Cohen takes his method acting to a whole new level with this new movie. In what will be the most talked about movie of 2020, Cohen reprises his role as the fictitious Kazakh journalist who’s out to prey on the ignorant and tackle the political and social issues of our time. From being locked in a house for 5 days with conspiracy theorists to infiltrating a VP Mike Pence speech at CPAC 2020, Borat’s character is completely entertaining and nerve wrecking at the same time.

This movie also brings a new character to the Borat story, his 15 year old daughter Sandra Jessica Parker Sagdiyev (played by Irina Novak). Sandra’s just as clueless as her father Borat, causing chaos and destruction everywhere she goes. Interestingly enough, as far as the internet goes Irina Novak may not really exist. The likely explanation here is that Cohen, as he did with the previous film, has sought out a lesser known actress to play the role of his daughter to throw the viewers off. My theory is that Irina is actually the Bulgarian actress Maria Bakalova. Go look her up and let the conspiracies go wild here.

Overall, this was hands down the most uncomfortable and wildly entertaining movie I’ve checked out this year. With just weeks before the election, this couldn’t have come at a better time. There’s a surprise ending in there that you will not understand how they pulled off, but all this to say the Republican party will have their hands full come election day. Cohen and his team crushed this sequel and I’m looking forward to the news coverage to come.