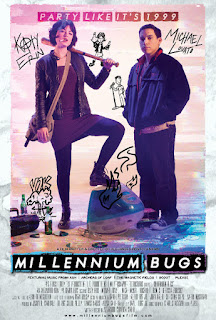 - Read Jared's review of 'Millennium Bugs.' Set in the last week of 1999, best friends Kelly and Miguel find themselves on the cusp of their future. Kelly has been floating through life after her parent’s death. Drowning herself in alcohol and drugs. When her inheritance money runs out, Kelly is slapped with the realities of her actions. Her best friend Miguel is torn between his immigrant parent’s expectations and his dream to become a comedian. The pressure to pursue his dreams while defying the sacrifices his parents made for him pushes Miguel to the brink. Together, Kelly and Miguel along the rest of the world find themselves wondering what’s next.

'Millennium Bugs' will have its World Premier at Dances with Films on Wednesday, September 2nd, 2020.

Millennium Bugs; a dramedy about two best friends who must make life changing decisions during the end of the world. This movie straps you in for an hour and a half of character arcs as flat as the jokes they told. Corny and cringey elements throughout has the audience wishing for a rewrite, while also thanking them from time to time for some comedic relief from the overwhelmingly lackluster emotional execution.

Our main character, Kelly, played by Katy Erin, serves as an annoyance whenever the film is focused on her journey, which completely pulls me away from being invested in her feelings and hardships. With the way she was written, it’s also hard to fathom that anyone would even be friends with her. Our hardly believable best friend, Miguel, played by Michael Lovato, had me a little checked out with his acting ability to convince me of the weight he wants us to believe he’s carrying, yet I turned out to be somewhat worried about him and his eventually likeable character in the end. The erratic editing styles at some points were harshly missing for me on most occasions, and had me feeling like they’d been wanting to do a certain sort of editing for a while, so they just threw it in this movie.

Something I WISH they would’ve thrown in the movie was character development. Who you see in the beginning of the film is exactly who you’re getting in the end. It definitely tarnishes a viewing experience when a primarily dialogue driven movie doesn’t have the slightest change in their characters for the entirety of the watch, especially when Miguel has no reciprocating love from Kelly in the beginning, therefore we get to see 90 minutes of an unrealistic friendship. This film also implies a lot of things and doesn’t actually show the audience proof of it. The time is set a week away from the possible the end of the world, yet I forgot about that for almost the whole movie because I was never won over to that concept after it was mentioned. I never felt like anything was at stake. Also, Miguel is a “struggling comedian”, yet there are no scenes of him working on jokes or actually attempting to grow in his craft. He just wishes he was better. Kelly doesn’t want to sell her house (for a reason that I can’t explain in this review), but the movie just IMPLIES why she doesn’t want to, and doesn’t actually SHOW us why. I guess I would say this picture is mainly driven by dialogue in the majority of the explanations for why these characters are the way they are, yet offer no visual confirmation towards the claims they write.

Overall, this film failed to convince me of the afflictions of these characters. If you have a dramedy that doesn’t hit its jokes and doesn’t hit the key, emotional aspect, what are you left with? I know the low budget could’ve had something to do with the overall product, but a low budget has nothing to do with writing and dialogue execution. Although this review has been primarily negative, I’d be lying if I said it wasn’t decently enjoyable. I’d definitely be interested in seeing the future films of Alejandro Montoya Marin to pin-point his style, and track his hopeful progress. 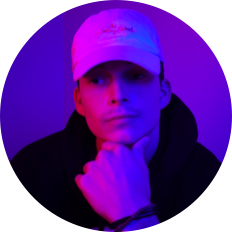