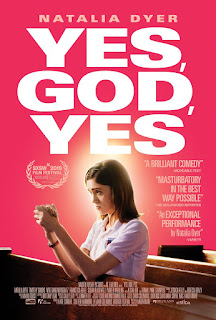 Yes, God, Yes is a comedic sexual journey through a few days in the life of 16-year-old Alice (played by Stranger Things's Natalia Dyer) who navigates the waters of masturbation amidst a sea of Catholic guilt. Innocent as heck, Alice's reputation is tarnished when a rumor goes around her school that she tossed a guy's salad at a party. She is peer-pressured into attending a weekend spiritual retreat put on by the school, where the priest is wearing "people clothes," the hot older seniors are on full display giving heartfelt testimonials, and the kids all sing songs about Jesus around the campfire. For Alice, it is also an opportunity to bring to light what's really going on behind closed doors. While it's preached that even sex with yourself outside of marriage is a sin, turns out there's a lot of sinning going around.

My favorite thing about this movie was its sense of setting. I am transported back to 2003 as Alice eats cheese puffs and snack packs, repeatedly rewinds her Titanic VHS tape back to the car scene, and secretly chats with strangers on AOL in her parents' basement. Throughout the movie she makes an honest effort to discover what "tossing someone's salad" means--something kids these days just can't relate to I'm sure. They'd Google that on their smartphones in a second. She also plays snake on her Nokia cell phone--which of course she finds has another use when set to vibrate.

This film provided lots of laughs throughout. Though with a short run time of 78 minutes, I did find myself a bit bored in the second half, wondering where it was going. There were some typical coming-of-age wrap-ups at the end, but I was still left wanting answers to several lingering questions. Perhaps the answers are unimportant, or perhaps the writer wanted to leave the viewer wondering.